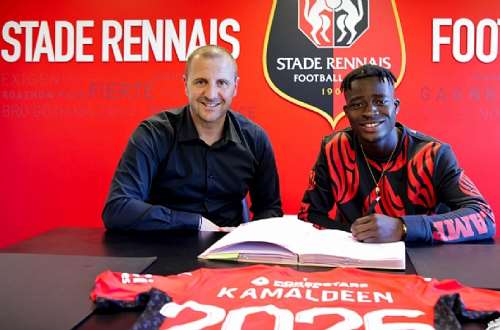 The talented forward has revealed that the former Chelsea star played a role in his decision to join Roazhon Park outfit in the ongoing summer transfer window.

Black Stars whizzkid Kamaldeen Sulemana has disclosed that he had a conversation with Micheal Essien before choosing Stade Rennais ahead of Ajax and host of European clubs.

Sulemana made the revelation during his official presentation to the fans of the Red and Black lads ahead of their 2021/22 season’s campaign.

“I spoke with Michael Essien who played in Bastia and Lyon. He was able to tell me about Ligue 1,” Sulemana told Stade Rennais TV
“It is one of the best championships in Europe. It was a good opportunity.”
“Stade Rennais FC will allow me to have playing time, more than elsewhere I think.”

The former Right to Dream graduate kicked against earlier decision to join Ajax, Manchester United and Liverpool for Stade Rennais until the summer of 2026 in a deal worth €15 million.
Sulemana had an impressive campaign in the Danish Superliga last term where he netted 10 goals and provided 8 assists in 29 appearances.
The promising whiz kid is yet to make his competitive bow for Ghana at the senior national team level, the Black Stars albeit featuring in two friendly games for the four-time African champions.
Credit: Ghanasportspage.com