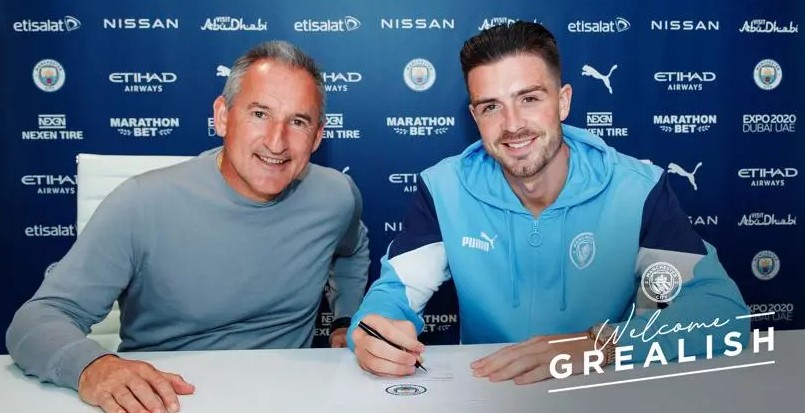 Manchester City are delighted to announce the signing of Jack Grealish on a six-year deal.

In addition to widespread admiration for his domestic performances, Jack also received plaudits for his impressive individual and team contribution to the England squad, as the national team reached the final of the Euro 2020 competition in a truly memorable summer for fans all over the country.

“I am incredibly happy to have joined Manchester City,” Grealish said. “City are the best team in the country with a manager considered to be the best in the world – it’s a dream come true to be part of this club.

Director of Football Txiki Begiristain added: “We are absolutely delighted to be able to welcome Jack Grealish to Manchester City. He is an incredible talent.

“Jack’s development over the past few seasons both for club and country has been plain for everybody to see. His natural talent together with his commitment to improve as a player, has seen him become one of the most exciting attacking players in world football today.

“I am certain that the fans are going to love seeing him in our team. Pep loves the way he plays, and we all feel he is an ideal fit for Manchester City. Our style and his style are a perfect match. I’m excited to watch him over the coming years.”

Everyone at Manchester City is delighted Jack has joined us and we all wish him the very best during his time here.

Jack Grealish, 25, is a player who possesses wonderful natural ability and flair – a rare talent who will add a new dimension to City’s potent attack.

He carries the ball superbly, has quick feet, can keep the ball in the tightest of spaces and is a superb passer. He’ll bring a new aesthetic to City’s play.

His career so far has been one of consistent improvement.

Joining Villa’s academy as a six-year-old, his first taste of notable youth success came when he won UEFA’s NextGen under-19 tournament in 2013.

Aged just 16, he was named as an unused substitute in a 4–2 home Premier League defeat against Chelsea on 31 March 2012.

He made a temporary switch to to Notts County in 2013, a move that fast-tracked his progress, with the physicality of League One football augmenting his technical quality.

He played 39 times during his loan period, scoring five goals, before returning to Villa for the final weeks of the 2013/14 season.

He made his Aston Villa debut at the Etihad as an 88th-minute substitute in a game that saw Yaya Toure score a wonder goal as City edged towards our second title in three years, before finishing top scorer as Villa won the 2014 Hong Kong Sevens tournament.

The following campaign saw him establish himself as a senior Aston Villa player. He appeared 17 times in the Premier League and featured in every round as they reached the 2015 FA Cup final, delivering a masterful performance in the semi-final win over Liverpool.

He played the full 90 minutes in the final, aged just 19, as Villa lost 4-0 to Arsenal. Grealish ended the season by collecting the club’s Young Player of the Year award.

He was named in the PFA Championship Team of the Year in 2018-19 as Villa won promotion to the Premier League via the playoffs, with Grealish taking on the captaincy in March of that season.

In their first year back in the top flight, Villa reached the League Cup final, losing 2-1 to City, as Grealish made 41 appearances in all competitions.

And in the 2020-21 campaign, he won Villa’s Player of the Season award, before making five appearances for England en route to the final of the Euros, delivering a game-changing cameo in the famous 2-0 last-16 win over Germany at Wembley.