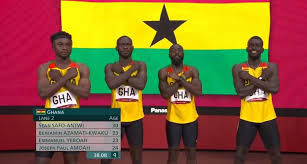 The expectations of some Ghanaians hoping to see the nation win a medal in the men’s 4x100m relay finals on Friday came to an abrupt halt after the quartet [Sean Sarfo-Antwi, Benjamin Kwaku-Azamati, Emmanuel Yeboah, and Joseph Paul Amoah] failed to glitter in the final analysis at the Tokyo Olympic Stadium.

After earning qualification to the final, captain of the Ghana Athletics Team [Joseph Paul Amoah] promised Ghanaians that he and his colleagues were going to put up a sizzling performance, but it ended otherwise as Team Ghana was disqualified having failed in the baton change.

“The finals will be different,” he said.

Like the finals of the Euro 2020 final game, Italy [di Lorenzo Patta, Marcell Jacobs, Eseosa Desalu, and Filippo Tortu] ensured that the men’s 4x100m gold goes to Rome instead of ‘Home’, crossing the finish line in 37.50 seconds.