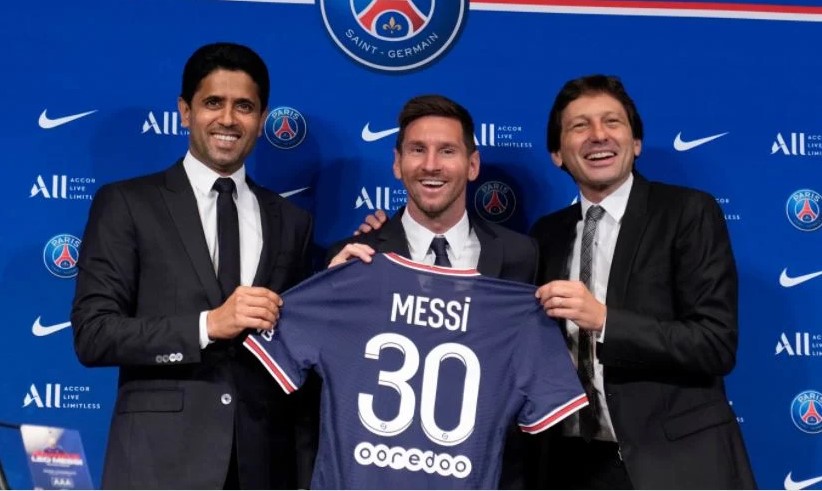 The Argentine superstar was officially unveiled by his new club, Paris Saint-Germain, on Wednesday and the tears felt like they were part of a distant past with all the talk of what he hopes to accomplish at PSG.

Messi was joined at the podium by PSG club president Nasser Al-Khelaifi.

When will Messi debut?

Messi was asked about this and he basically left it as TBD:

“I don’t know,” he said. “I spoke yesterday to the technical staff. Maybe I need a preseason myself. I’m going to begin to train and work and I hope I can play as soon as I can. I want to, but I can’t answer that exactly. When I feel it and the staff thinks I’m OK, then I’ll be ready and willing to play.”

It’s all about the Champions League

If there was any doubt as to why PSG brought in Messi, it was erased during this presser. The Champions League is clearly the holy grail for Paris Saint-Germain, which has yet to win the trophy despite coming close on a few occasions. Messi clearly wants to win it again — he still has not been able to do it without Xavi and Iniesta — but “the best team doesn’t always win” is probably not what PSG fans wanted to hear on the first day.

“It’s not easy,” Messi said. “Sometimes you can have the best team in the world and you don’t win the Champions League. This is football. It’s about the margins, the details. Paris knows this. They’ve been so close to a victory in the Champions League but couldn’t make it. But they were close. In this competition the best teams are playing and it’s difficult to win it.

“You need a united squad and group. This dressing room, from what I could see from the outside, is very united, but you also need luck. You can also chase luck. In the Champions League not always the best team wins. It’s a special competition and that’s why it’s so beautiful and important. They all want to win. We all want to win this competition.

”My goal and my dream is to win this trophy again and I think that Paris is the best place to have a chance to win it again.”

Amid all the fanfare of Messi joining a new club, many are still wondering how Neymar, Messi, Kylian Mbappe, Gigi Donnarumma and a host of other world stars can all be recruited to join PSG without the club contravening European soccer’s Financial Fair Play guidelines (spending not exceeding $35 million more than revenues).

Al-Khelaifi said the club is in compliance. If anything, it’s set to earn a ton more from Messi’s signing.

“For us always, as we said, we follow the financial fair play regulations from Day One we started and till the end. We’re always going to fulfill the regulations of FFP [financial fair play]. Before we do anything, we look at it with our financial and legal people. If we signed Leo [Messi], it’s because we had the capacity to sign him.

“You, as media, need to also focus not only the negative side, but there’s a lot of positive he’s bringing to the club in terms of commercial and social media. He’s a big asset to the club. The club increased in every single part of the club. It’s unbelievable.”

A deal done in five days

So how exactly does a deal of this magnitude get done in just a matter of days? That’s another question that many will have from watching the process unfold. But what might be most interesting was the way Al-Khelaifi framed the Messi departure from Barcelona as “when Leo decided to leave Barcelona.”

“It was very quick,” Al-Khelaifi said. “When Leo decided to leave Barcelona and finish with Barcelona, the discussion started and it was the desire from both sides to sign him and we are here.”

“From the first day of the press release in Barcelona they were quick in negotiations and it has been quite easy,” Messi said. “It was a tricky situation and they really solved problems. It wasn’t easy and they did it well.”

Does Messi hope to avoid having to face his old club in the Champions League? Not necessarily.

”I knew I was going to arrive at a strong team and a team aiming to win the Champions League. I love to win. I want important goals. I know that my goals and PSG’s goals are the same and we want to be bigger and bigger.

“I don’t know if we’re going to face each other,” Messi said. “It would be nice to go back to Barcelona. I hope it would be with the fans because of the pandemic. It would be strange to play in Barcelona with another shirt, but it can happen. We’ll see.”

From Neymar to manager Mauricio Pochettino and Argentine compatriots, Angel Di Maria and Leandro Paredes, it’s obvious that the friendships he has at PSG went a long way in ensuring negotiations moved swiftly.

”The whole [PSG] locker room and the technical staff had an influence on my decision,” Messi said. “When we saw it was possible the first thing we did was to talk to them and to Pochettino. We‘ve known each other for a long time and we’re both Argentine. It’s easier because we’re close in a way. Of course, we talk and it’s been very easy since the very beginning.

“Of course, I’ve got some friends here in the dressing room,” Messi reiterated. “When you see the squad you really want to play with them because there are so many possibilities to achieve what you want. We’ve got the same goals when we were not together, and now that we are together with Neymar and the rest of the team I hope we can make it. Di Maria, Paredes — I know all the teammates in the dressing room — we’ve had contact. And Neymar, of course, was important in my decision.”

With Neymar and Messi likely dominating the headlines in the months to come, what will happen with French star Kylian Mbappe, who’s entering the final year of his contract with PSG? The president posited an aggressive response:

”I think everybody knows the future of Kylian,” Al-Khelaifi said. “He’s a really competitive player. He wants to win and win trophies. He stated it publicly. He wanted a competitive team and I think we have the most competitive team in the world. There’s no excuse for him now. He can’t do anything else but stay.”