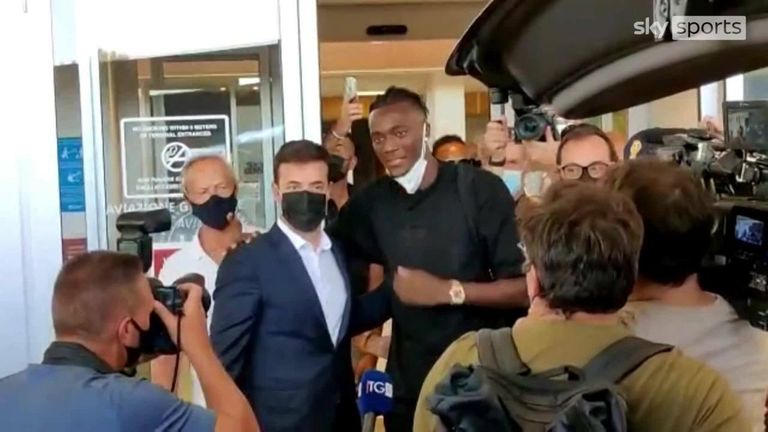 Chelsea striker Tammy Abraham has completed a medical ahead of joining Roma for £34m.

Talks progressed positively after Roma general manager Tiago Pinto met the striker in London on Thursday, and the Serie A side believe he will be a key part of boss Jose Mourinho’s plans.

Abraham is expected to sign a five-year contract worth £4m a year after tax.

Chelsea will have €80m buyback option on the 23-year-old, which can be triggered in the summer of 2023.

Abraham fell out of favour at Chelsea once Thomas Tuchel replaced Frank Lampard at Stamford Bridge, despite finishing last season as the club’s joint-top scorer with 12 goals.

The arrival of Romelu Lukaku from Inter Milan for a club-record £97.5m pushed the player further down the pecking order and all but ended the possibility of him staying in the Premier League.

Fellow Serie A side Atalanta and Arsenal also expressed an interest in Abraham, but Chelsea’s preference was always to sell him to a foreign club.

Tuchel: My fault for not trusting Abraham

Chelsea head coach Thomas Tuchel has accepted some responsibility for Tammy Abraham’s lack of opportunities last season as the striker’s future at Stamford Bridge lies in the balance.

Although Tuchel refused to directly address Roma’s offer during his press conference ahead of the Super Cup final, the head coach said: “Tammy is right now in the squad. He did some good preparation matches.

“He was clearly not happy with the last half a year and maybe he has reason also not to be happy and maybe it was also my fault not to push him, not to trust him on the same level I maybe trusted other players.

“I can absolutely understand that he wants more minutes. So the decision will be ‘how do we plan, what are Tammy’s plans, does he fight his way back into the team from the position where he ended last season or does he want to change club to have the chance of being a regular starter?'”