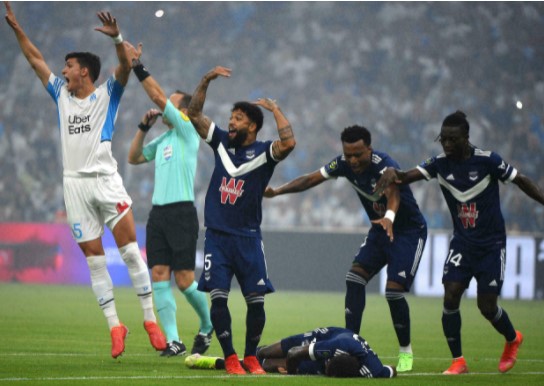 Gideon Mensah (far right) in the tick of affairs as players of Bordeaux and Marseille call out for medical attention for injured Nigerian striker of Bordeaux, Samuel Kalu, during the 2nd day of L1, August 15, 2021 at the Stade Vélodrome which finished 2-2 - Sylvain THOMAS AFP

Ghana defender Gideon Mensah put up an impressive showcase on his French Ligue 1 debut on Sunday as Bordeaux rallied to draw 2-2 with Olympique Marseille.

The on-loan left-back was deployed in a more offensive role as part of a five-man midfield comprising Toma Basic, Otávio, Issouf Sissokho and Enock Kwateng.

According to statistical firm Fotmob, he was the second best player in the Bordeaux set-up with 7.0 rating.

They home side then doubled their lead four minutes before the interval courtesy Payet.

Substitute Timothee Pembélé pulled a goal back in the 51st minute.

Bordeaux then drew level in the 56th minute when Toma Basic’s corner from the left was met by Oudin, who swept in a first-time shot on the half-volley from the edge of the area.