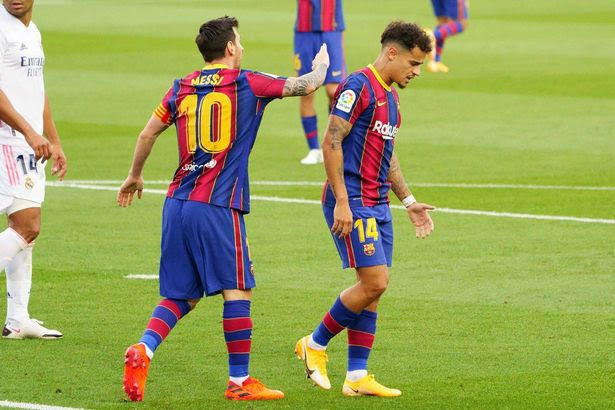 Philippe Coutinho has been offered the No.10 jersey at Barcelona vacated by Lionel Messi, according to reports in Spain.

Messi, 34, wore the iconic number for 13 glittering seasons after inheriting it from Ronaldinho but joined Paris Saint-Germain this summer after he was unable to pen a new contract at Barca.

But Coutinho is said to be aware that taking Messi’s former shirt will bring with it a huge amount of added pressure at a time when he is already facing great scrutiny.

His final decision is unlikely to become clear until Saturday night’s clash at Athletic Bilbao, when fans will eagerly await the number he appears with.

That’s according to Mundo Deportivo , which claims manager Ronald Koeman will regard Coutinho as one of his senior players this season after a lack of attractive offers for his services this summer.

Coutinho missed the vast majority of last season with a major knee injury but he has returned to fitness in time for the new campaign.

While he played no part in the 4-2 victory over Real Sociedad in La Liga last Sunday, striker Rey Manaj was named on the bench with Coutinho’s former No.14 shirt.

The No.10 jersey is the only vacant one in the Camp Nou dressing room and the report adds Coutinho is weighing up taking it after he was offered it by club chiefs.

Koeman firmly believes the former Inter Milan and Espanyol star can revive his Liverpool form and there may yet be a long-term future for him in Catalonia.

The same cannot be said for defender Samuel Umtiti and midfielder Miralem Pjanic, who are out of the Dutchman’s plans and tipped to leave within the next fortnight.

Pjanic and Umtiti’s departures would free up the No.8 and No.23 jerseys respectively, perhaps providing Coutinho with another option if he turns down Messi’s old jersey.

Barcelona’s No.25 shirt is also vacant but La Liga reserves this number for a goalkeeper.

Coutinho wore No.10 while on loan at Bayern Munich two seasons ago, a glittering spell during which he helped the Bavarian giants win the treble.