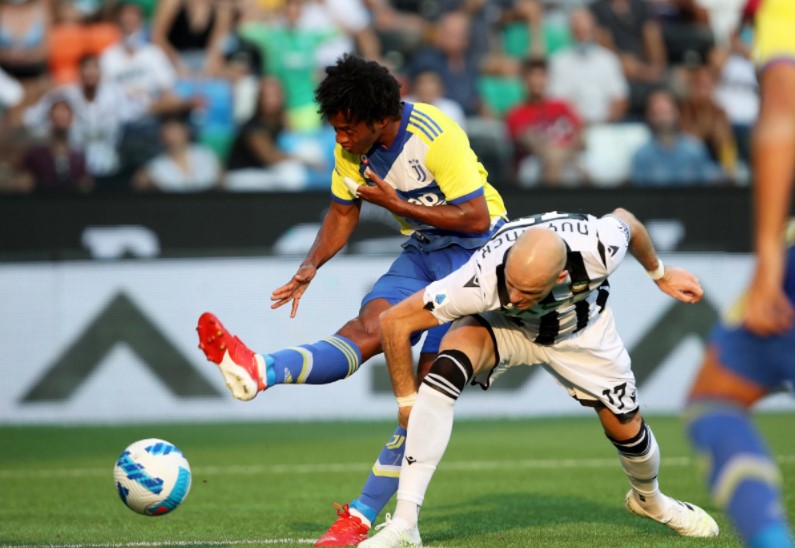 The Bianconeri made their ‘debut’ under returning coach Allegri, with Weston McKennie suspended, Adrien Rabiot and Arthur injured. The real shock was Cristiano Ronaldo benched, seemingly not because of any particular injury, while Federico Chiesa and new buy Manuel Locatelli were not 100 per cent fit.

It took under three minutes to break the deadlock, Juan Cuadrado in a more advanced role than usual feeding Rodrigo Bentancur down the right, pulled back for Dybala to just prod in from seven yards.

Cuadrado got the second goal, sent running by a wonderful Dybala cross-field pass, cutting inside past Bram Nuytinck and drilling into the far bottom corner with his right boot.

Udinese were gifted a chance back into the game when Wojciech Szczesny first only parried a Tolgay Arslan effort, then brought the same player down on the rebound for a penalty. Roberto Pereyra converted it against his old club.

Gerard Deulofeu might’ve had another penalty soon after for a Danilo tackle, but VAR ruled he was offside anyway.

Cristiano Ronaldo did come off the bench and immediately turned a free header wide from a set play, then laid it off for Bentancur’s strike to thump the upright from the edge of the area.

However, Udinese pounced on another absolute calamity from Szczesny to equalise. He tried to dribble Stefano Okaka on a Leonardo Bonucci back-pass, got caught out and Deulofeu was ready to tap into an empty net. It was initially ruled offside, but VAR confirmed Deulofeu was behind the line of the ball.

Suddenly, all the momentum was with Udinese, who should’ve gone 3-2 up when Mato Jajalo fired over under pressure from Giorgio Chiellini.

Deep into six minutes of stoppages, Cristiano Ronaldo popped up with a towering header on Federico Chiesa’s cross to seemingly give Juventus the three points. However, after an agonising wait for everyone in the Dacia Arena, VAR ruled it offside.