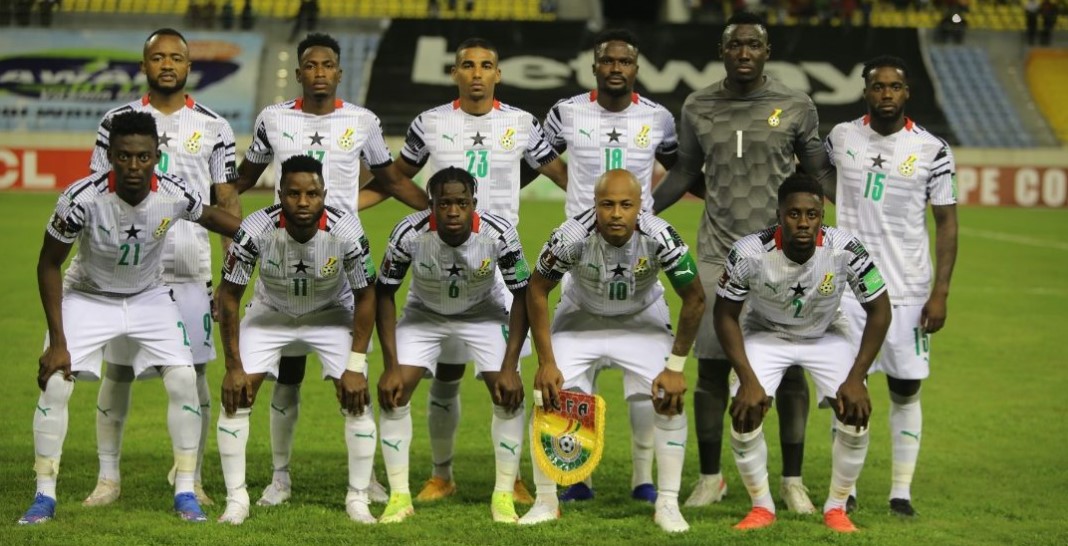 Ghana’s senior national team, the Black Stars, started the 2022 World Cup with a hard fought victory over the Walia Ibex of Ethiopia on Friday night in Cape Coast. Mubarak Wakaso’s 37th minute strike separated the two sides on a cold night at the Cape Coast Stadium in Ghana.

In a game that lacked chances, it was the Ethiopians, who controlled the early exchanges with some swift passing.

However, Ghana captain Andre Ayew came close twice in the space of four minutes after some quick feet from his brother Jordan, who laid both passes to him.

Ghana were then forced into a first half change after Jeffrey Schlupp picked up an injury in the 25th minute, and was replaced by debutant Daniel Kofi-Kyereh.

Wakaso and others sing the Ghana national anthem before the game: He scored the only goal after 37 minutes

With eight minutes to half time, Andy Yiadom found Mubarak Wakaso few meters away from the box, and the Shenzen FC man pulled one of his fiery shot with the Ethiopian goalie failing to grab.

The Black Stars went into the break with the lead. Ghana chased an illusive second goal, creating chances from set pieces but it was Yaw Yeboah, who pulled a great save from the Ethiopian goalie.

Daniel Kofi-Kyereh had a chance to make it two but unselfishly laid the ball to Andre Ayew who was slow to the ball.

The victory sends Ghana top of the table before their trip to Johannesburg for the match against the Bafana Bafana of South Africa following the goalless draw against Zimbabwe in the other Group G game in Harare earlier today.