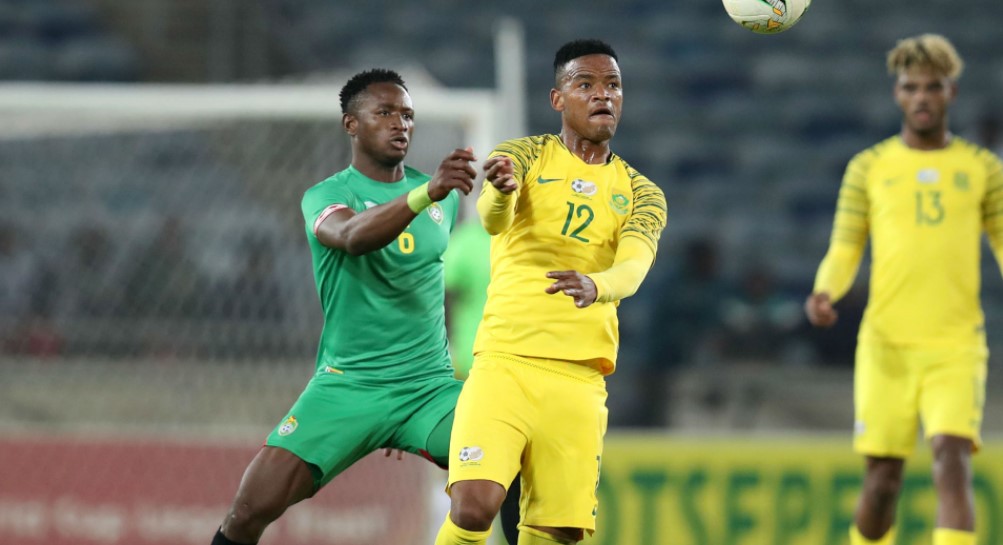 Apart from hosting and playing at the 2010 tournament, the men’s senior national team are attempting to qualify for the global showpiece for the first time since the 2002 edition.

On Thursday, a young 23-man South Africa squad arrived in Harare with the nations World Cup hopes on their shoulders.

New head coach Hugo Broos, who was in the dugout in his first-ever match in charge, would have known that the intense game could have seen either side end up with three points.

Broos’ charges came out with much intent in the opening minutes at the Zimbabwe National Sports Stadium, probing the home side.

Bafana had much possession at the start, but simple crossing and passing in the final third of the pitch evaded the visiting side.

South Africa then shook off the nerves and came close with a chance to take the lead through a training ground move.

Teboho Mokoena was on the receiving end of a short corner-kick before playing it back to Gift Links, who then slotted an inch-perfect cross for the lanky Evidence Makgopa.

However, Makgopa saw his headed effort go over the crossbar.

Mokoena showed much promise in midfield and nearly scored with a 35-year strike, but Zimbabwe goalkeeper Talbert Shumba made a fantastic save to keep the scores level.

The home side eventually came alive as they pressed a tired-looking Bafana Bafana, who held a nearly 65 percent possession.

The Zimbabwean press was effective and put Bafana on the back foot as the Warriors got to see more on the ball.

With that newfound possession, the dangerous Kudakwashe Mahachi attempted a long-range strike.

But Williams was lucky enough to see his effort float wide.

Zimbabwe then nearly punished Bafana Bafana following a poor attempt at playing an off-side trap. Kaizer Chiefs star Khama Billiat sneakily got away from his marker and pulled the trigger inside the penalty area, only for captain Williams to palm it to safety.

The Warriors continued to show promise early in the second half, but Broos responded with much-needed energy upfront as Bongokuhle Hlongwane replaced Links.

The Maritzburg United star immediately impacted the match with his pace. He ran nearly 50 yards beating two Zimbabwe defenders before releasing a vicious strike that Shumba palmed to safety.

Percy Tau, who struggled to get going in the match, got a rare opportunity at goal with a curling effort, but Shumba again came to the Warriors rescue.

In the dying minutes of the encounter, Zimbabwe further held their ground defensively as it seemed they were content with a stalemate as the final whistle sounded after stoppage time.

The draw sees South Africa move to first place in Group G, with Ghana and Ethiopia yet to play on Friday at 21:00.

South Africa are next in action against the Black Stars on Monday while the Warriors travel to Ethiopia for their match on Tuesday.