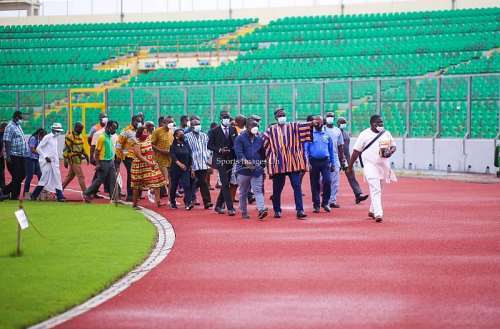 The edifice was shut down in February 2019 for renovation by the National Sports Authority [NSA].

Hon. Ussif was accompanied by the Ashanti Regional Minister Simon Osei Mensah to inspect the edifice.

Hon. Ussif assured Asante Kotoko, King Faisal and second-tier outfits, who use the facility for their home matches that the edifice is 100 per cent (100%) ready to host football matches.

“We must laud His Excellency Nana Addo Dankwa Akufo-Addo for his immense contribution to the growth of Sports across the country. It is a remarkable feat under his administration where there are over 70 astroturfs and 10 Youth resource centres nationwide,” Ussif told reporters at the Baba Yara Sports Stadium.

“We are satisfied with the work the contractors has done. The facility will be commissioned in few weeks for the various clubs in the Ashanti Region to use it as their home venue in the upcoming season.

“The Stadium is now in a good shape with ultra-modern floodlights and other facilities which gives clubs like Asante Kotoko, King Faisal and other Division One League teams the green light to play their home matches.

He also appealed to spectators to be watchdogs of the facility in any game and also assured of a maintenance manual to avoid its deterioration.

Management members of Asante Kotoko led by Chief Executive Officer, Nana Yaw Amponsah and the club’s Communications and Brand manager David Obeng Nyarko were present at the Baba Yara Sports for the inspection.