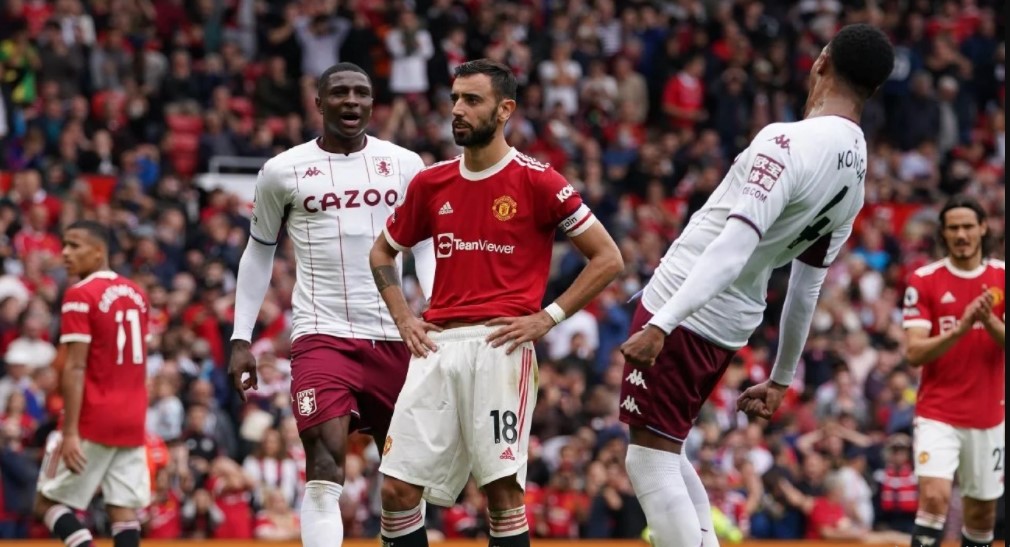 Ole Gunnar Solskjaer has been at Manchester United long enough to know that you are never more than one game away from a crisis, and after Aston Villa’s 1-0 win at Old Trafford on Saturday, it’s now three defeats from the past four games for the Norwegian.

A first Premier League defeat to the season — thanks to Kortney Hause’s 88th-minute winner and an even later penalty miss from Bruno Fernandes — followed on quickly from the Carabao Cup third-round exit to West Ham on Wednesday and a shock defeat at Young Boys in the Champions League on Sept. 14.

It’s only September and the past 10 days will be quickly forgotten if United can string together a run of form either side of the October internationals. For now, though, it is not going well.

“I thought we were very good on the transition, attacked quickly and then when we got up there the final decision, the execution, the quality wasn’t good enough to get goals,” said Solskjaer after a chaotic 90 minutes. “The game ebbed and flowed — it was a good game for the neutral. Unfortunately, we get a goal against us on the corner. We didn’t have enough control, even though we had 60% possession and 30 shots. What hurt us was the corner kick at the end and Bruno, one of his very rare misses.”

It was a case of famous last words.

It looked like it might be one of those frustrating afternoons for United until Hause headed in Emiliano Buendia’s corner at the near post just two minutes from time to make a poor result look even worse.

Solskjaer wasn’t happy, and not just because the goal had come from a set piece. “You see the inconsistencies, VAR (video assistant referee) and decision-making,” he said. “[Ollie] Watkins is clearly obstructing David [De Gea] as the header goes in. The linesman does well, calls the decision into VAR, but they turned it down, so bad decisions again.”

Still, even with the summer arrival of Raphael Varane from Real Madrid, United have now gone eight top-flight home games without a clean sheet for the first time since the 1971-72 season. The cause wasn’t helped by losing both Luke Shaw and Harry Maguire to injury, but the warning signs were already there.

Matt Targett missed a sitter at the back post in the first half, and De Gea needed to make a good save from Watkins after the Spaniard was handed a hospital back-pass from Maguire. At the other end, United had 28 shots, and while Emiliano Martinez made a couple of good saves, he didn’t need to play out of his skin to earn Villa their first win at Old Trafford since December 2009. It was only their second Premier League win over United in their last 46 attempts.

United’s best chance fell to Fernandes in stoppage time when Mike Dean awarded a penalty after Edinson Cavani’s header hit Hause on the hand. Fernandes, rather than Cristiano Ronaldo, took responsibility to salvage something but blasted his kick high into the Stretford End.

There’s no point Solskjaer complaining his team don’t get enough penalties if they are going to miss the ones they get, although he suggested afterward Fernandes had been put off by the Villa players who crowded the penalty spot before the kick.

“Bruno is such a good penalty taker and you would back him with your mortgage,” said Solskjaer. “He will step forward every day of the week for the club and the team and sometimes it just doesn’t go your way. It is such a fine line between heaven and hell. What I don’t like is how they crowded the referee and the penalty spot. They got what they wanted.”

It was United’s final effort and the 55th shot they’ve had over the course of the past two games without managing to score. It was unfortunate for Solskjaer that because of injuries to Shaw and Maguire he could only bring on Cavani as his one attacking change; Anthony Martial and Jadon Sancho were both left stranded on the bench.

The issue for Solskjaer now is what happens from here. Beat Villarreal on Wednesday and Everton on Saturday and the past week and a half will look like teething problems for a team still trying to gel. Continue to struggle, however, and the pressure will start to mount ahead of a run of games that already look daunting.

United’s next four league games after facing Everton are against Leicester, Liverpool, Tottenham and Manchester City. Solskjaer has a history of getting good results when he has needed them most, but it would be a lot to expect any team to come through a fixture list like that unscathed.

United and their manager are at a crucial juncture.