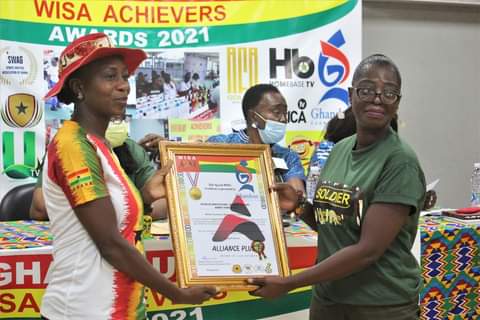 Women in Sports Association (WISA) last Saturday organized their seventh Achievers  Awards ceremony at the the Media Centre of the Accra Sports Stadium.

The event which was sponsored by Ghandour Cosmetics saw 48 sports personalities and institutions  being honored  for excelling in various sporting disciplines.

12 people were given special meritorious awards for their excellence.

She said, despite the challenges, the major sponsors assisted in making the event a success. She petitioned NSA to support in future for such programme to aid in sports developments.

Madam Gloria Commodore noted that the programme is to encourage and acknowledge individuals and organisations within the sporting fraternity.

The awardees included the two female athletes who represented Ghana at the Tokyo 2020 Olympic Games, the Mackorley sisters who are members of the Golden Rackets and three female boxers.

President of the WOSPAG, Mrs. Joyce Mahama urged women to vie for higher positions within the industry. She added that if all women come unto the platform, they will have the voice to speak against the abuse and surge forward.

Mrs. Vivian Dougblor, Director of Sports (Development) who represented the Director General of the National Sports Authority, Prof Peter Twumasi, extended her greetings and commended the organisers as well as the awardees.

She assured WISA of the Authority’s constant partnership with them. She again assured them of policies that will raise women in sports development and promotion.