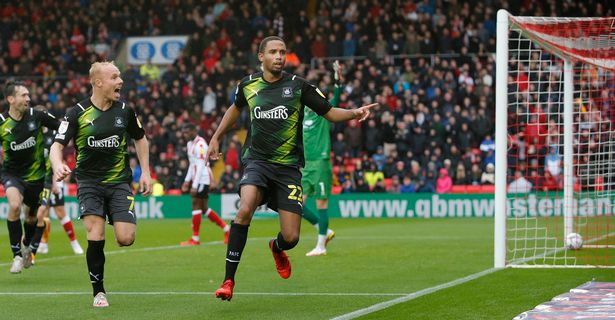 Zimbabwe defender, Brendan Galloway celebrates after putting his side 2-1 up in the League One game against Lincoln City at the LNER Stadium on Saturday, October 2, 2021

Brendan Galloway scored his first goal for Plymouth Argyle in the 2-2 draw against Lincoln City in the English League One on Saturday.

The Zimbabwean defender scored the goal in the 74th minute, connecting a corner kick to restore Argyle’s lead. However, the 25-year old conceded a penalty on the stroke of full-time, and the hosts converted from the spot to force a share of points.

Galloway, who signed with the club in the pre-season, was making his eighth league start of the campaign and played the entire game. Overall, he has appeared in nine games, sitting out in just two.

The Warriors star also has an assist in his name while playing as a centre back.

“Was up against Lincoln’s main attacking threat in Anthony Scully and dealt with him very well. His first goal for Argyle was a spectacular one and would have won the game had referee Andy Woolmer not awarded a late penalty for a foul by the defender on Lasse Sorensen outside the box,” read a citation for Galloway by the Plymouth Herald who rated him 8/10 for his performance in the game.

Meanwhile, Plymouth coach, Ryan Lowe refused to blame Galloway over the penalty incident that cost his side victory over Lincoln City and has asked for an apology from referee Andy Woolmer who ruled that Galloway had fouled Lasse Sorensen inside the box, as TV replays showed that contact was made just outside the 18-yard area.

“He (Galloway) watched it back with me. He was saying the first one he gets a good tackle and then the kid (Sorensen) wiggles in,” said a very disappointed Lowe.

“You can see, we have actually stopped it on the video, he’s a foot outside the penalty area as he touches the lad, and the lad touches the ball into the box.

“So he’s disappointed, as you can imagine, because he would have been the hero, scoring the winner, and now people will look that he has given a penalty away.

“There is no blame on Brendan whatsoever, no blame on anyone. Okay, the build-up to it we might have been able to do a little bit better but Lincoln have got some good players and they play the right way. We are disappointed with a decision.”

On Galloway’s 74th minute strike, Lowe said: “It should have counted as the winning goal. They (Lincoln) were looking for offside, and it definitely wasn’t offside, and Brendan has put it in the back of the net.

“Then he gets hard done by down the other end, so that’s a disappointment for Bren, for us, his team-mates and the fans, because we should be sitting here with three points and a 2-1 victory.”

Galloway has been named in Zimbabwe’s 24-man squad set to face Ghana in a two-legged 2022 FIFA World Cup qualifiers next week.