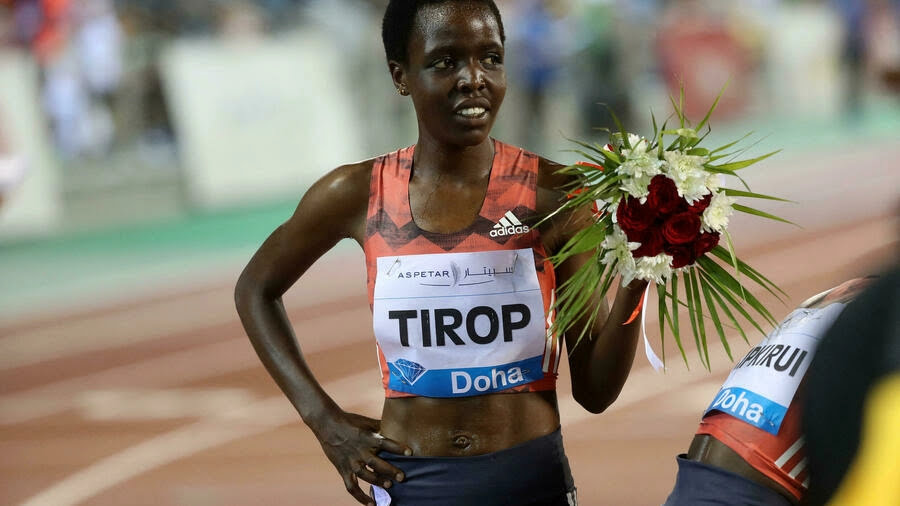 One of Kenya’s leading athletes, Agnes Tirop, has been found stabbed to death at her home in Iten, with police treating her husband as a suspect. The 25-year-old athlete, who broke the women-only 10,000m road record last month and also won bronze medals at the 2017 and 2019 world championships, was discovered by police on Wednesday after being reported missing by her father.

Tom Makori, the head of police for the area, confirmed that Tirop’s husband was a suspect after going missing. “When [police] got in the house, they found Tirop on the bed and there was a pool of blood on the floor,” he said. “They saw she had been stabbed in the neck, which led us to believe it was a knife wound, and we believe that is what caused her death.

“Her husband is still at large, and preliminary investigations tell us her husband is a suspect because he cannot be found. Police are trying to find her husband so he can explain what happened to Tirop.”

Last month, Tirop smashed the women-only 10km world record in Germany, crossing the line in 30:01 to shave 28 seconds from the previous record, set by Morocco’s Asmae Leghzaoui in 2002. She also competed for Kenya over 5,000m at the Tokyo Olympics, finishing fourth in the final.

Tirop gave early notice of her supreme talent by winning the world cross country title as a 19-year-old – the second youngest person to do so after Zola Budd in 1985. Athletics Kenya said it was still working to uncover details of the incident and added: “Kenya has lost a jewel who was one of the fastest-rising athletics giants on the international stage, thanks to her eye-catching performances on the track.”

Meanwhile Kenya’s president Uhuru Kenyatta also expressed his horror at the murder of an athlete he called a hero. “It is unsettling, utterly unfortunate and very sad that we’ve lost a young and promising athlete who, at a young age of 25 years, had brought our country so much glory,” he said. “It is even more painful that Agnes, a Kenyan hero by all measures, painfully lost her young life through a criminal act perpetrated by selfish and cowardly people.

“I urge our law enforcement agencies to track down and apprehend the criminals responsible for the killing of Agnes so that they can face the full force of the law,” he added.

The Kenyan journalist Evelyn Watta told the Guardian that as well as being a brilliant athlete, Tirop was well liked by her teammates. “As a person she was jolly, always smiling and very thoughtful with her words, very humble and respectful. She could come across as shy but it just needed asking the right questions. It’s just really sad news.”