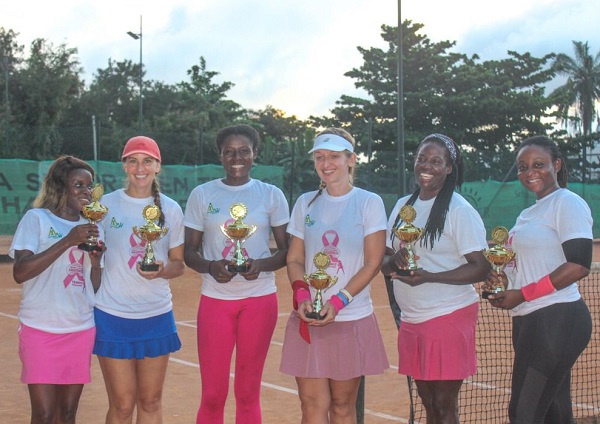 Evelyn produced an impressive performance, but Eugenia eventually came out on top to win the ultimate trophy.

“The first thing I’ve learned this two days is that nothing is impossible,” Eugenia said. “After seeing the draw it dawned on me that I can win this tournament and here am I with my trophy, if you fight, if you work, after all these years, you can achieve anything. Sometimes you have tough moments”.

“We were very focused and believed until the last moment. Today was the same, we are really proud of the achievement,” Delladem said,

On her part, the Tournament Organizer, Madam Brigitte Dzogbenuku said, “I want to thank the doctor, nurse and the Breast Cancer survivor who happened to be my childhood friend and all the players who participated in the two-day tournament, am grateful to the sponsors that came on board (Ecobank, Hollard Insurance, FC and Ghandour) to make the All-Women’s Breast Cancer Awareness Tennis tournament a successful one.”