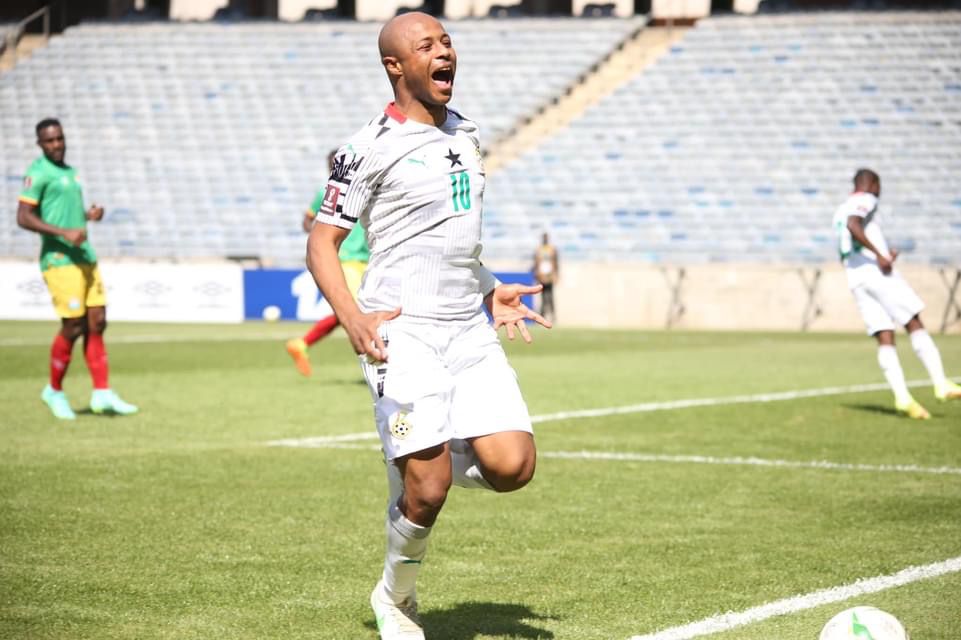 Andre Ayew’s spectacular first half free kick wasn’t enough to give Ghana all the points as Ethiopia fought back to draw 1-1 with the Black Stars at the Orlando stadium in Johannesburg on Thursday.

The Al Sadd attacker burnt in a lofty free kick into the roof of the net in the 22nd minute to give Ghana the lead. Andre picked his spot before drilling home the opener from the edge of the box following a foul on Richmond Boakye Yiadom. Celta Vigo’s Joseph Aidoo replaced the suspended Alexander Djiku in a starting line-up that had Mohammed Kudus, Jordan Ayew, Kamal Deen Suleymana, Abdul Baba Rahman and Richmond Boakye Yiadom starting.

Ghana started the game on a strong footing and made early incursions but were twice denied by goalkeeper Teklemariam Shanko.

The Black Stars got the breakthrough in the 22nd minute through Captain Andre Ayew who burnt in a delicious free-kick into the roof of the net.

Ethiopia started to commit men forward and had a few shots on target but the score line remained unchanged due to the brilliance of Joseph Wollacott who made three superb saves on the spin to keep the Black Stars in the game.

Back from recess, the Wailias who had a lion’s share of ball possession in the first half continued from where they left off by asking questions and knocking on the doors of Ghana. Shimelis Bekele nearly got the equaliser for the Walias but his shot from the edge of the box rattled the upright having beaten meandered his way through the Ghanaian defence.

Ethiopia finally got their equaliser in the 72nd minute from captain Getaneh Kebede who scored from close range after Joseph Aidoo had lost possession on the edge of the box.

Coach Milovan Rajevac brought on Abdul Fatawu Issahaku, Daniel Kyereh and Caleb Ekuban to shore up the attack but that didn’t provide the needed result as the referee blew his whistle to end the game.

Ghana are now level on points with South Africa (10) but the latter take on Zimbabwe in the other group G game later on Thursday.

The Black Stars will host the Bafana Bafana in the last round of qualifiers on Sunday, November 14, 2021 at the Cape Coast stadium.