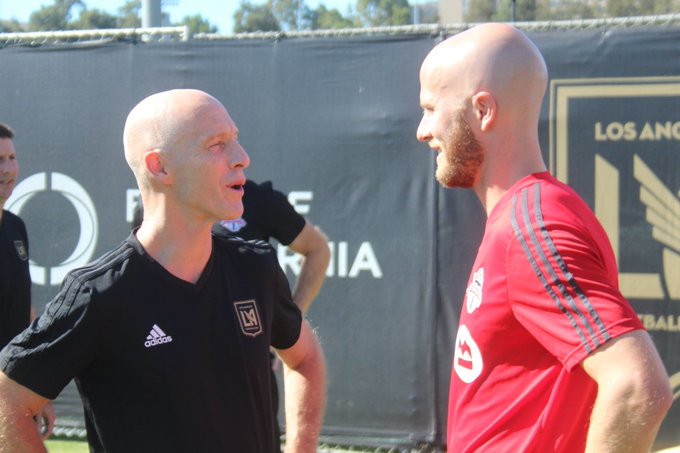 Toronto FC has named Bob Bradley head coach and sporting director, looking to his experience and savvy to revive the franchise after a failed season.

The 63-year-old Bradley, father of TFC captain Michael Bradley, parted ways with Los Angeles FC last Thursday after a 12-13-9 season that saw it finish ninth in the Western Conference, missing the playoffs by three points.

Toronto is hoping that the three-time MLS coach of the year will restore the franchise to its former glory under Greg Vanney, who left last December to take over the Los Angeles Galaxy.

“We are excited for Bob to get to work,” Toronto president Bill Manning said in a statement. “We are entering an extremely important off-season and know we have a team that needs a significant makeover. Bob has experience putting teams together and in getting them to perform at a high-level. He understands the expectations and standards of TFC and is ready to take on this challenge.”

Bradley, who has coached the U.S. and Egypt national teams, owns a career MLS record of 182-127-86 and ranks third in MLS victories all-time (behind Bruce Arena and the late Sigi Schmid). He has more wins that the Toronto franchise does all-time (153).

“I have seen firsthand the passion that Toronto has for football and the way the club has connected with the city,” he said. “I look forward to putting a team on the field that will make our fans and supporters proud.”

Michael Bradley said he is excited, more so for the club.

Toronto fired first-year coach Chris Armas on July 3 after the team stumbled to a 1-8-2 start that culminated in a humiliating 7-1 loss at D.C. United. Assistant coach Javier Perez, put in charge the rest of the way, was let go Tuesday.

On Monday, the team parted ways with Ali Curtis, general manager and senior vice-president of soccer operations, paving the way for Bradley.

In fact there will be three Bradleys on the Toronto payroll with Jeff Bradley the team’s director of communications. Bob Bradley becomes TFC’s 12th head coach.

“Huge for this club to have someone like that. He’s successful and he knows what he’s doing,” said fullback Richie Laryea. “So I think it’s a great hire for the club and I know all the guys are going to be very excited to work with him, because he’s top.”

Bob Bradley was coach of the MetroStars when the team drafted 16-year-old Michael in the fourth round (36th overall) of the 2004 MLS SuperDraft. An injury kept the teenager out of the 2004 season but Bradley played in 30 games in 2005 when his father was fired late in the campaign.

Michael Bradley went on to play in the Netherlands, Germany, England and Italy before returning to MLS in 2014 with Toronto.

Bob Bradley, who had previously coached the Chicago Fire, went on to take charge of Chivas USA before coaching the U.S. from 2006 to 2011 and Egypt from 2011 to 2013. He then returned to club football, coaching Norway’s Stabaek, France’s Le Havre, and Swansea City of the English Premier League before taking charge of LAFC in 2018.

LAFC set the record for most points in an expansion season in 2018 and made the U.S. Open Cup semifinals, won the 2019 Supporters’ Shield with an MLS-record 85 goals and then-record of 72 points, and advanced to the 2020 Scotiabank CONCACAF Champions League final, becoming the first MLS team to defeat three Liga MX clubs in a single tournament.

A Princeton graduate, Bradley began his coaching career in the collegiate ranks with stints at Ohio University and Princeton around an assistant coaching job at the University of Virginia under Arena.

He was reunited with Arena at D.C. United, winning two titles before taking over expansion Chicago in 1998, winning both the MLS Cup and U.S. Open Cup in his first season.