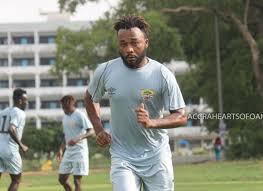 Hearts of Oak midfielder, Gladson Awako has said he is willing to excel at new club Hearts of Oak after his transfer brouhaha.

The midfield kingpin shockingly stopped training with the club in September, two weeks after his acquisition from Great Olympics for an unknown reason.

This became the talk of town amid reports that Awako alleged a spiritual attack on him as reason for refusing to train with the team.

But after barely two months, Gladson Awako has started training for Hearts of Oak, and is currently in camp with the Ghana champions preparing for the CAF Confederation Cup playoff first leg against Algerian outfit, JS Saoura at the Accra Sports Stadium this Sunday.

“He [Samuel Boadu] is a human, and can’t give in like that. Definitely there is pain, he is not happy with me, but we do talk so maybe with time, he is going to be fine and everything will also depend on me to give in what he expect of me on the pitch,” Awako told Juliet Bawuah in an interview on TV3.

“If he thinks today he want to feature me in a game , then I need to give in everything he expect from me, and that will in a way let him feel relieved and he can create a good relationship with me,” he added.

Gladson Awako joined Hearts of Oak on a two-year deal from their city rivals, Great Olympics for an undisclosed fee during the last domestic transfer window.