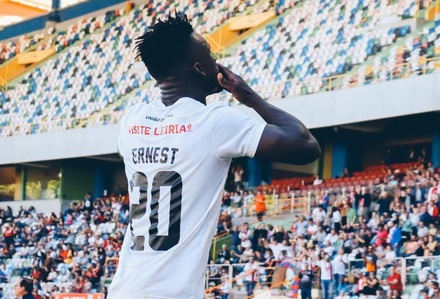 Ghanaian forward, Ernest Nyarko scored his second goal of the season for FC Lviv in the Ukra Premier Liga on Friday evening away from home.

The 26-year-old Ghanaian attacker scored the opening goal of the match to put the visitors 1-0 up after 17 minutes of play against the Ukrainian giant FC Shakhtar Donetsk.

Tete grabbed the equalizer for the home team on the stroke of half time when he excellently converted a spot kick on the 45th minute mark.

The hone team then turned on the screws and scored additional five goals after the break to thump the away team 6-1 to go top of the league table with 44 points from 17 games.

The 26-year-old Ghanaian attacker, Ernest Nyrako has two goals and four assists in 15 matches this season in the Ukrainian Premier League.