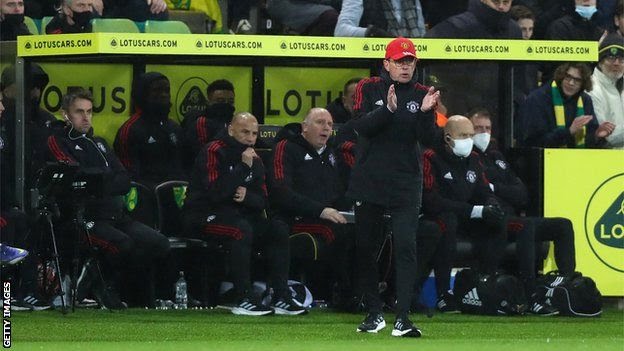 Manchester United’s Premier League match against Brentford on Tuesday night has been postponed after a Covid-19 outbreak at the Old Trafford club.

The league says the decision was made “following guidance from medical advisers due to the exceptional circumstances” of the outbreak.

Earlier, United shut down operations at their Carrington training ground to minimise the risk of infection.

In the past week 42 Premier League players and staff have tested positive.

United say positives cases among staff and players reported on Sunday have been confirmed by PCR tests and the outbreak “requires ongoing surveillance”.

All of Manchester United’s players tested negative before Saturday’s 1-0 win at Norwich, but some tested positive before training on Sunday morning.

“Given cancellation of training and disruption to the squad, and with the health of players and staff the priority, the club requested the match to be rearranged,” United said in a statement released at 23:50 GMT on Monday. “The Premier League Board took the decision to postpone based on guidance from medical advisors.”

The league says the fixture, due to have been played at 19:30 GMT, will be rearranged “in due course”.

Brentford apologised to their fans for the “disruption” but they “respect” the decision, adding the “health and safety of both clubs’ players and staff must always come first”.

The latest positive cases in the league are the highest recorded in a seven-day period since testing began in May 2020.

On Thursday, following the introduction of new coronavirus rules in England to limit the spread of Omicron, the Premier League told clubs to return to emergency measures, including social distancing and wearing masks.

A league statement on Monday said the frequency of lateral flow and PCR tests for players and staff would increase.

Last season, Newcastle United’s game at Aston Villa in the Premier League was postponed following a “significant increase” in Covid-19 cases at the Magpies’ training ground.

Later that month, a coronavirus outbreak at Manchester City caused their Premier League match at Everton to be postponed four hours before kick-off.

Villa also had a Covid-19 outbreak in January, which meant no first-team players were available for an FA Cup third-round defeat by Liverpool, while Premier League games against Everton and Tottenham were then rescheduled.