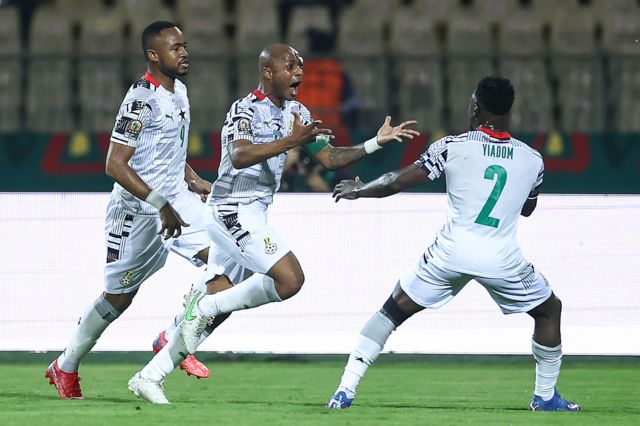 GHANA’S Black Stars will aim to stage a cut-and-run performance tonight when they lock horns with Comoros in a final AFCON Group C tie at the Stade Omnisport Roumdé Adjia, Garoua.

Appeared to be suffering death by a thousand cuts, the Stars must beat the Islanders at all cost to put themselves in peak position for a strong third-place finish, and a round of 16 berth.

Anything short of victory would be enough to bundle the Ghanaians out of a challenging Cameroon 2021 campaign that have seen them stumble 0-1 to Morocco in the opening game before conceding late in a disconcerting 1-1 tie with Gabon.

Last time the Stars exited at the group stage was during the 2006 tournament held by Egypt. Before then, they had crashed out in the opening round of the Burkina Faso ’98 tournament – culminating in the stunning resignation of the team’s ‘maestro’ – Abedi Ayew Pele.

It was also the last time the celebrated Abedi Pele featured competitively for the Stars.

Eighteen years later, a similar ordeal confronts Ghana unless they can turn on the style tonight, and break the back of the beast – no matter what it takes.

“We are going to do everything possible to win and go through,” Skipper Ayew told the media yesterday.

However, looking at the tight contest in the race for the fourth-best third-placed slots, the Stars might need more than a solitary victory of 1-0, to sail through.

The Comoros (The Coelacanths), debutants in Cameroon, are technically out of contention, but would fancy causing a major upset to a Ghana team that has not yet demonstrated enough derring-do and character.

On two occasions, the Stars conceded late in games that should have seen them pick vital points, and possibly relieve them of the unspeakable pressure they are going through at the moment.

Sweat merchant of the Ghana team, Milovan Rajevac, agrees with this assertion and says he is working hard on the team’s supposed lack of concentration and focus, which normally occur in the dying embers of the game.

Currently, too, in the hot seat for delayed substitutions and general team play, the Serbian trainer would have to dive deep into his repertoire and pluck something more thrilling and animating as the Stars seek massive redemption tonight.

It is evidently clear that Milo would not have to rely on the convalescing Mohammed Kudus, who is still not in the team’s camp. According to his Dutch team – AFC Ajax, their attacking midfielder will join the Stars if the team progresses to the next stage of the competition.

Questions have been raised by Ghanaians as to why the coach would still want to rely on a recuperating player whilst many local talents like Dreams FC Fatau Ishahaku, Great Olympics’ Maxwell Abbey Quaye and RTU’s David Abagna continue to fritter away on the bench.

Many of the game’s pundits also assert that Milo’s unnecessary delay in substitutions might come to hunt him if he fails to react now.

Importantly, too, in a bid to ensure massive victory today, the technical men must see to the Stars cutting off its lily-livered defending as they dash for the jugular, to get out of the eight-ball.

Comoros booked their place in the tournament when they finished runners-up to Egypt with nine points from six qualification games. They may have had a baptism of fire in Cameroon, but cannot be taken for granted.

Equatorial Guinea’s eye-catching win over champions Algeria suggest that the gap between the so-called minnows and giants, has narrowed significantly.

So far, Ghana has had two dates with Comoros. Under Israeli manager Avram Grant, the Stars first drew barren with the Islanders away on November 13, 2015, and beat them 2-0 four days later at the Baba Yara Sports Stadium in Kumasi to advance to the third round of the Russia 2018 World Cup qualifiers.

The two men who got victory for the team – Dede Ayew and Mubarak Wakaso, are still available and know a way around the Coelecantes.

Quite a handful of the Comorian players, too – defender Kassim Amahada, midfielder Mohammed Youssou, Red Star Belgrade forward El Fardou Ben, striker Kassim Abdallah, Mohammed M’Changama and including their manager – Amiredine Abdou, is around, and could have revenge embossed on their mind.

That should not stop the Stars, who have not won a game since securing a place in the play-offs of the 2022 FIFA World Cup back in November, from cracking a good victory tonight after a potentially absorbing encounter.

Should Coach Rajevac decide to make major changes today, he would be missing the services of Yeni Malatyaspor forward, Benjamin Tetteh, who was red-carded in a post-game rumpus, after coming off the bench against Gabon last Friday.  He will also not have Mallorca midfielder Baba Iddrisu, who limped off in the Gabon tie.

On the reverse, Comoros have no suspension concerns and would enjoy a full-strength squad at their disposal.

As the minutes tick away gradually to the must-win game, Ghanaians will doubtlessly sit on tenterhooks for as long as it would take the tie to end.

If the Stars really want to break the 40-year trophy wait, then they need to put on their belts and braces and make the nation proud by ensuring they get it right tonight – at least.