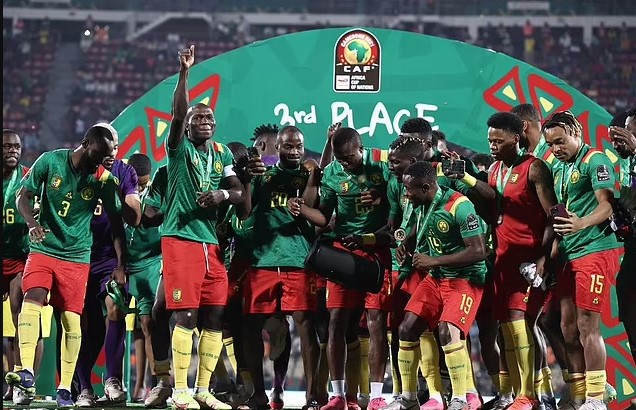 In a game that lacked quality but had its fair share of drama, Cameroon did the impossible to turn a topsy-turvy game on its head and beat Bukina Faso on penalties after a 3-3 draw in the bronze medal match at the Africa Cup of Nations.

Strikes from Steeve Yago and Djibril Ouattara sandwiched a calamitous Andre Onana own goal looked as though they were enough to secure the third-placed finish for Kamou Malo’s side, as three was very much the charm… or so it would seem.

A game where the tempo was marred by fouls from both sides and with a sheer lack of clear-cut chances, Burkina took the lead against the run of play, as left-back Yago popped up at the far post on 24 minutes to convert a sumptuous Issa Kabore cross as both full-backs combined to seize first blood.

Ajax goalkeeper Andre Onana practically threw the second into his own net as another Kabore cross caused bedlam; and after VAR had adjudged that the right-back kept the ball in play, Onana’s blushes were not spared as Burkina found themselves two up on the stroke of the interval.

It was three not long after: Ouattara powerfully nodding beyond the hapless Onana from a delightful Bertrand Traore inswinger, as Burkina Faso threatened to run riot and pile the embarrassment onto their Cameroonian counterparts.

Cameroon’s forward Vincent Aboubakar (R) celebrates with teammates after scoring a goal during the Africa Cup of Nations (CAN) 2021 third place football match between Burkina Faso and Cameroon at Stade Ahmadou-Ahidjo in Yaounde on February 5, 2022

Antonio Oliveira threw on his stars from the bench in a desperate attempt to save the game, but as shots rained down on the Burkina goalmouth, the Indomitable Lions just couldn’t seem to force the issue as Burkina held firm.
Stephane Bahoken managed to strike from close range after a corner melee with 18 minutes to go, and Cameroon had that glimmer of hope, and boy, did they take it.
Not before Vincent Aboubakar had halved the two-goal deficit; nodding home from a Nicolas Ngamaleu corner to throw doubt into some Burkina Faso minds, but they held firm once more as Cameroon barraged.
The former Porto striker came up with the goods right at the death: capitalising on a fumble from goalkeeper Farid Ouedraogo, as he slid into an unguarded net to record an unforgettable comeback.
After initial confusion as to whether we’d have penalties or extra time, a shootout was agreed, and it would be Blati Toure who would miss the crucial penalty; third for Burkina Faso, as Onana finally made amends for his poor display in the initial 90 minutes, pulling off the save that would prove pivotal.
Ambroise Oyongo stepped up and dispatched the winning spot kick to write his name into Cameroonian history; to surely cap off one of the craziest games the AFCON has ever seen.

It was just that sprinkling of star dust that saw the Cameroonians sneak the win from the jaws of defeat, as the introduction of Aboubakar, Ekambi and Ngamaleu proved the right decision and the turning point of the game.

They offered the calmness and experience to get the job done when it seemed near-impossible, and the Indomitable Lions rocked their opposition as soon as the first goal went in, as the inexperienced Burkina players looked around at each other for some sort of moral support.

It didn’t come, and Cameroon cranked up the heat.

Aboubakar was at the fore, netting again with a key header and poked finish in the dying embers of the game, and he led by example, dispatching the first penalty of a very successful shootout.

Calmness personified. Stepping onto the pitch with his nation in peril, he mustered all his experience and poacher’s instincts to haul them back into the game and to the bronze medal. He was in the right place at the right time to take his two chances, producing a masterclass in attacking positioning as he proved a thorn for Edmond Tapsoba, who was put in charge of marking the number 10. A fantastic, super sub performance.

24′: GOALLL!!! That wasn’t supposed to happen! Steeve Yago puts Burkina Faso ahead, tucking away a delicious Kabore cross at the far post! What a time for the left-back to pop up!
43′: GOALLL!!!! It’s two! Can you believe it? VAR has looked at the initial Kabore cross, it didn’t go out of play, and Onana makes a right mess of it and bundles into his own net! Incredible! 2-0 Burkina Faso!
49′: GOALLLL!!!! Incredible, it’s three! Djibril Ouattara this time, who nods home after a sumptuous Bertrand Traore cross.
72′: GOALLL!!! Cameroon are back into it, and it’s Bahoken with the finish. A tap-in from the corner, but they all count.
85′: GOALLL!!! Hang on! There’s another twist to the tale as Vincent Aboubakar forces home another and halves the two-goal deficit. Game on!
87′: GOALLLLL!!!! They’ve done it! It’s 3-3!!! It’s that man Aboubakar again, and he’s struck just in time to level it for the Indomitable Lions!
90′: SAVED! Toure is denied by Onana!!! Advantage Cameroon!
90′: Oyongo… wins it for Cameroon!!! That’s it! They’ve done it!
Credit: Eurosport