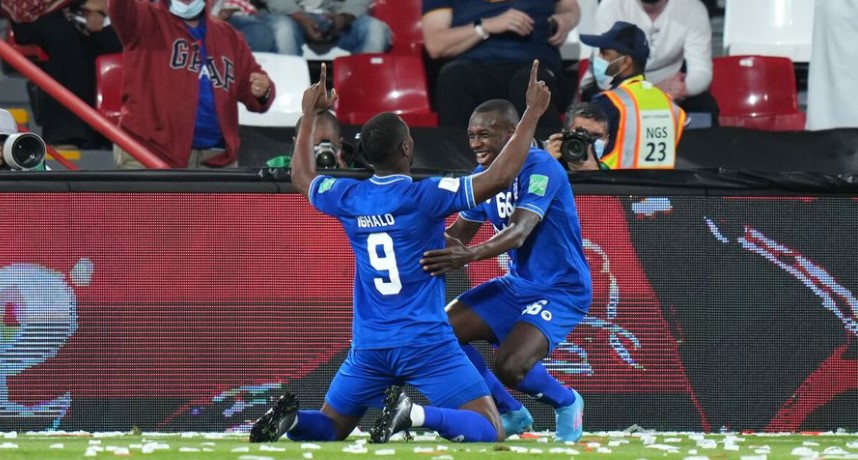 Al Jazira went ahead in the 14th minute through Abdoulay Diaby, but Al Hilal bounced back with two quick goals to take the lead into the second half, where four different scorers found the back of the net to claim an emhpatic win over the Emirati champions.

Making two changes from their opening match, with Mohammed Al Attas and Abdulla Ramadan starting instead of Mohammed Jamal and Zayed Al Ameri, the home side started strongly and were in the lead inside the opening quarter of an hour.

A string of pinpoint passes saw the ball sent to right wing-back Mohammed Rabii behind the Al Hilal defence and the young Moroccan squared for Diaby to sweep home the opener.

Following a shaky opening half of an hour, Al Hilal regrouped and were able to claw back their opponents in the 36th minute after central midfielder Mohammed Kanno surged into the box from the left and chipped a cross for Odion Ighalo to head past the line despite Milos Kosanovic’s desperate attempt to clear the ball, the Nigerian marking his Al Hilal debut with a goal following his January move from neighbours Al Shabab.

Just before the half ended, there was more good news for the Asian champions courtesy of another former Premier League player as Matheus Pereira finally opened his Al Hilal account six months after joining the club.

Kanno was again the mastermind of the attack, dispossessing left wing-back Abdullah Idrees deep in his half and starting a quick succession of passes that saw Salem Al Dawsari backheel to Pereira and the former West Brom playmaker curled into the far corner to send Al Hilal into the dressing room with the lead.

Half the crowd thought parity had been restored 10 minutes after the restart when the overlapping Idrees received Joao Victor’s pass and crossed for Ahmed Al Hashmi who took it first time on the half volley, wrong footing the goalkeeper, but narrowly missing the target.

Instead, the goal arrived at the other end minutes later when Kanno rose highest to meet Pereira’s outswinging cross from the corner and make it 3-1.

Al Dawsari put the cherry on top of the victory cake for the Saudi side with a wonderfully played fourth goal in the 77th minute. The 2021 AFC Champions League MVP exchanged passes with Moussa Marega before rounding goalkeeper Ali Khaseif and finishing into the empty net to make it four.

Marega turned from scorer to creator in the last minute of the game, taking advantage of chaos inside the Al Jazira box to seize possession off the ball five yards from goal and coolly beat Khaseif for five.

There was still time for substitute Andre Carrillo to get in on the act with a penalty in added time following a handball by Al Jazira defender Khalifa Al Hammadi.