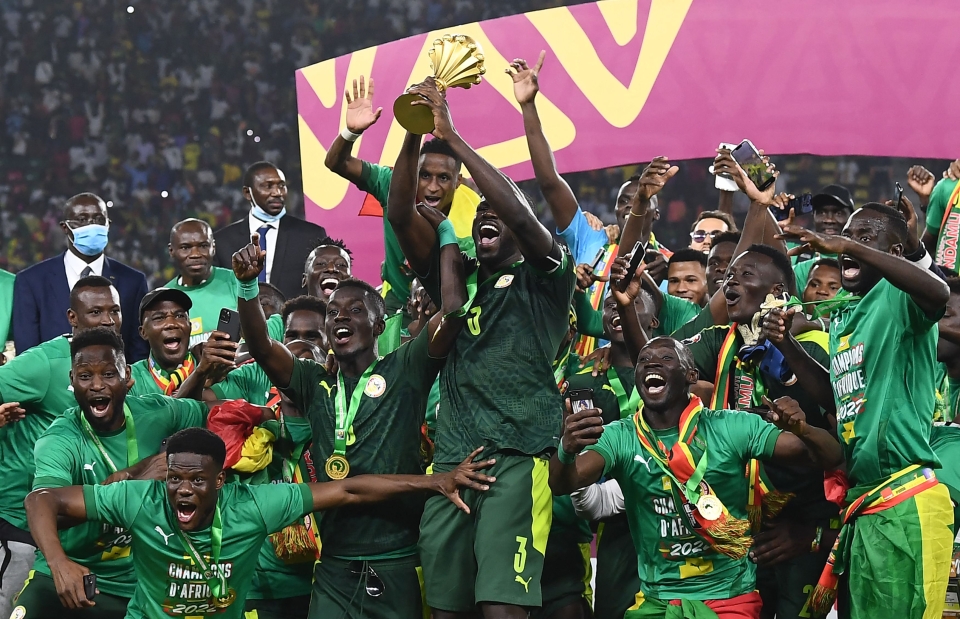 Senegal are African champions for the first time ever

Sadio Mane netted the winning spot-kick as Senegal beat Egypt 4-2 on penalties to clinch their first-ever Africa Cup of Nations after a 0-0 draw.

The Liverpool forward had seen a seventh-minute penalty saved by Egypt keeper Gabaski but Mane held his nerve when he returned in the shootout.

Chelsea’s Edouard Mendy denied Mohanad Lasheen to give Mane the chance to win it in Yaounde’s Olembe Stadium.

Gabaski had made three good saves from Senegal’s Bamba Dieng in extra time.

All four of Egypt’s knockout games at the tournament went the distance, and the North Africans had beaten Ivory Coast and hosts Cameroon on spot-kicks en route to the final.

Gabaski had already saved four penalties at the tournament by the time the match went to a shootout, but on this occasion the 33-year-old was not able to emerge on the winning side.

Egypt were the first to err when centre-back Mohamed Abdelmonem saw his penalty hit the left-hand upright and bounce away – but Gabaski immediately denied Bouna Sarr.

However, Lasheen was then denied and Mane won it with an emphatic finish into the bottom left-hand corner, meaning his Liverpool team-mate Mohamed Salah did not even have the chance to take a penalty, with the Pharaohs captain set to go fifth for his side.

The two sides will meet again in March in a two-legged play-off for a spot at the 2022 World Cup in Qatar.

It was no more than the Lions of Teranga deserved after dominating for long periods, only to be denied repeatedly by Gabaski, but they finally got their chance when Mohamed Abdelmonem blasted his effort from 12 yards against the post and Chelsea keeper Edouard Mendy saved from substitute Mohanad Lasheen.

Mane’s evening got off to a very different start when, after Saliou Ciss has been tripped inside the box by Abdelmonem, he went head-to-head with Gabaski from the spot. The frontman opted for power but the Egypt keeper dived to his right to beat his attempt away.

Senegal dominated the early exchanges without managing to make the pressure tell, and they were served with a timely reminder of the threat posed by Salah when he embarked upon a mazy 28th-minute run only to scuff his shot at Mendy.

However, Aliou Cisse’s men continued to dominate with Gabaski’s goal coming under increasing pressure as the second half got under way.

Substitute Marwan Hamdy might have won it when he glanced a 75th-minute header across the face of goal as Mendy dithered and Senegal substitute Bamba Dieng volleyed high over at the other end as time ran down, but extra time was required.

Gabaski denied Dieng seconds into the added period and then repelled his downward header and a viciously-swerving piledriver to preserve Egypt’s hopes, but it was opposite number Mendy who had to be at his best to keep out Hamdy’s blistering 116th-minute strike and then came out on top in the shoot-out.