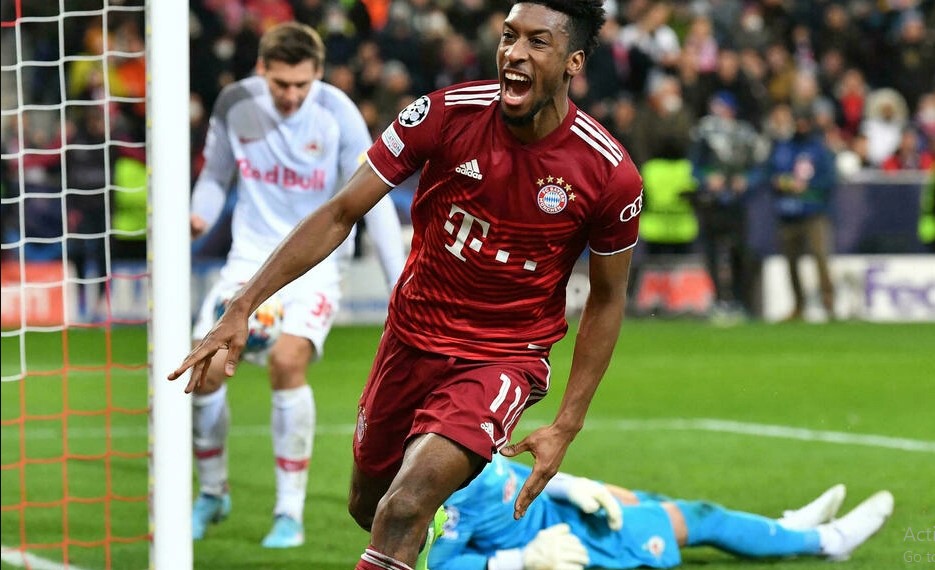 French winger Kingsley Coman spared his side’s blushes with a late equaliser as Bayern Munich laboured to a 1-1 draw away to Red Bull Salzburg in the Champions League last-16 first leg on Wednesday.

Coman prodded the ball in at the far post in the last minute of normal time to cancel out Junior Adamu’s first-half opener and save Bayern from a first away defeat in the competition since 2017.

Bayern arrived in Austria looking to bounce back from their shock defeat to Bundesliga minnows Bochum on Saturday, but there were early signs of the same defensive wobbles which had plagued them at the weekend.

A mistake from Niklas Suele opened up a chance for Brenden Aaronson after just a few minutes, as Salzburg snapped at the heels of the Bayern back line.

The visitors also had chances at the other end, but continued to look vulnerable and Salzburg deserved their lead on 21 minutes.

A soaring long ball from Mohamed Camara opened Bayern up on the counter-attack, and Adamu curled the ball in with an elegant first-time finish.

Adamu had come on as an early substitute for the injured Noah Okafor, and he and his fellow forwards continued to unsettle the Bayern defence before the break.

The hosts had a penalty appeal waved away just before half-time, before sitting back and soaking up pressure in the second half.

But despite dominating possession and running Salzburg’s full-backs ragged, Bayern toiled in their search for an equaliser.

As the pressure mounted towards the end of the game, Salzburg keeper Philipp Koehn denied Coman with a reflex save and neutralised a sharp counter-attack by snatching the ball from the feet of Leroy Sane.

A mistake from Sane almost allowed Salzburg to kill the game off 10 minutes from time, but Benjamin Pavard denied Adamu his second with a desperate block on the line.

But Bayern’s patience paid off when Coman finally broke the Austrian defences as the clock ticked down towards injury time.

A floating cross from Pavard was flicked on by Thomas Mueller to Coman, who slotted the ball past Koehn to avoid a second shock defeat for Bayern in the space of just five days.