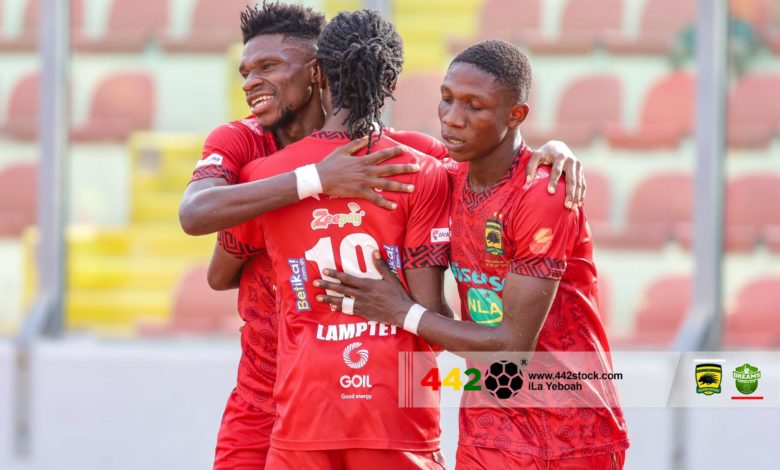 Asante Kotoko extended their lead at the top of the Ghana Premier League to ten points after a hard fought home win over wasteful Dreams FC at the Baba Yara Stadium in Kumasi.

The Porcupines needed to wait for the magic feet of Cameroonian starman, Franck Mbella Etouga to strike gold with only 15 minutes left having sat on hooks over the period with Dreams FC dictating and directing play.

It was the wastful boots of Agyenim Boateng Mensah, Isaah Ibrahim, and Ali Huzaf that allowed the ‘Red Army’ to build confidence.

In the end when they got their magical moments, Kotoko scored twice in 10 minutes to send the ‘Believers’ heading to the mountainous town of Dawu empty handed.

The win gives the 24-time Ghana champions a ten point lead at the top following the loss of Bechem United at Tarkwa.

The Hunters held their resolve until a 90th minute penalty by Vincent Atingah killed their ambition of keeping tabs on the Porcupine Warriors. The win keeps Medeama SC within the reach of the top 4.

In Dormaa, Aduana Stars and Bright Adjei continued their fine form with two early first half goals to dislodge Karela United. ‘Mr CNN’ got all goals before the 20th minute to add to his 23-minute hat-trick he scored before the league went on a recess.

Defending league champions, Accra Hearts of Oak failed to hold unto a first half  lead after veteran midfielder Sulley Muntari got his first assist since joining the club as youngster Osman Amadu got a late equaliser for Legon Cities to deny the champions their first win in 5 matches.

Berekum Chelsea relied on a solitary goal from Osei Owusu to keep them off the drop zone in a game Bibiani Goldstars gave them run for their money. The win lifts Chelsea to the 8th position on 25 points.

Elmina Sharks continued their struggle despite changing their technical set up with the arrival of Kobina Amissah, Accra Lions kept their best for last with a  87th minute equaliser from the boots of Kasim Osman.

Perhaps the most shocking result of the week was at the Len Clay Stadium in Obuasi where home side Ashantigold lost heavily to 16th positioned Techiman Eleven Wonders. Wonders recorded one of their heaviest victories since joining the top flight with a 4-1 win away.

On Friday, Academy boys, WAFA SC continued their struggles with yet another home defeat at the hands of King Faisal who are playing one of the best games this season. Goals from Mawuli Wayo, and Osman Ibrahim were enough to seal all 3 points for the Insha Allah boys.

The weekend results have lifted Asante kotoko to a 14 point gap between them and champions Hearts of Oak, with both sides preparing for the 2022 President’s cup match in Accra this Friday.