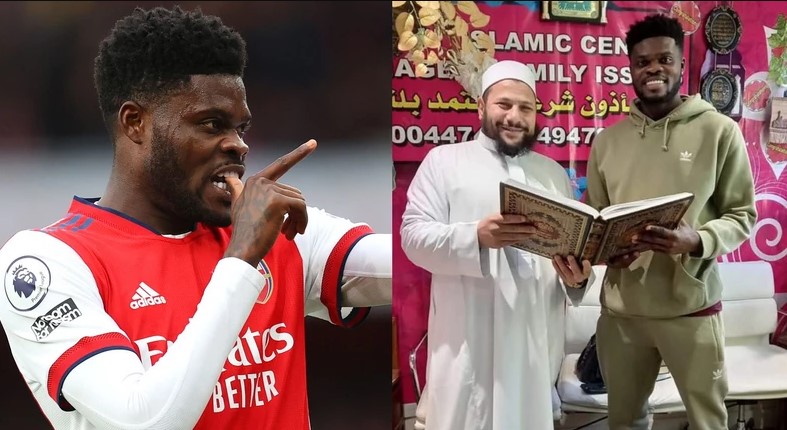 Ghana and Arsenal midfielder Thomas Partey has successfully converted from Christianity to Islam. The 28-year-old has now joined the long list of popular sports personalities who have converted to Islam.

Meanwhile, a source close to the midfielder also confirmed to Pulse.com.gh that the Arsenal star has indeed converted to Islam.

“Yes, he has converted to Islam. It’s true [Partey is now a Muslim,”the source told Pulse.com.gh.

Partey has been one of Arsenal’s best players in recent months as the Gunners aim to qualify for the UEFA Champions League.

The Ghanaian has scored two goals and provided one assist for Mikel Arteta’s side, who sit fourth in the Premier League.

He described Aubameyang as a great person, adding that he is delighted to see the striker scoring goals for the Spanish outfit.

Aubameyang was suspended in December by Arsenal manager Arteta for a disciplinary breach after he allegedly stayed an extra day after visiting his mother in France.

He was later stripped of the club’s captaincy and frozen out of the first team, before ultimately joining Barcelona on a free transfer in January.

Since moving to La Liga, the Gabonese striker has been in imperious form and has already found the net seven times for the Blaugrana in as many starts.

“When you are given the chance as a boss, you have to make decisions as a boss,” Partey told Sky Sports in an interview.

“Every decision he has made because he was given the chance to do it. We have to understand and accept because we have to accept how he wants to play. We are following it.”

He added: “For us, every decision he makes, we have to accept it, even if we don’t want it. It’s the decision of him and the club.

“I always watch most of the games of Barcelona and Atletico [Madrid]. I am very happy for him. We know that he is a great person, a good player and he can score. I feel happy for him in Barcelona because he is doing a great job there. I also think he will be watching us and be happy for us.”

Partey is in his second year at Arsenal after joining the Gunners from Atletico Madrid in the summer of 2020.