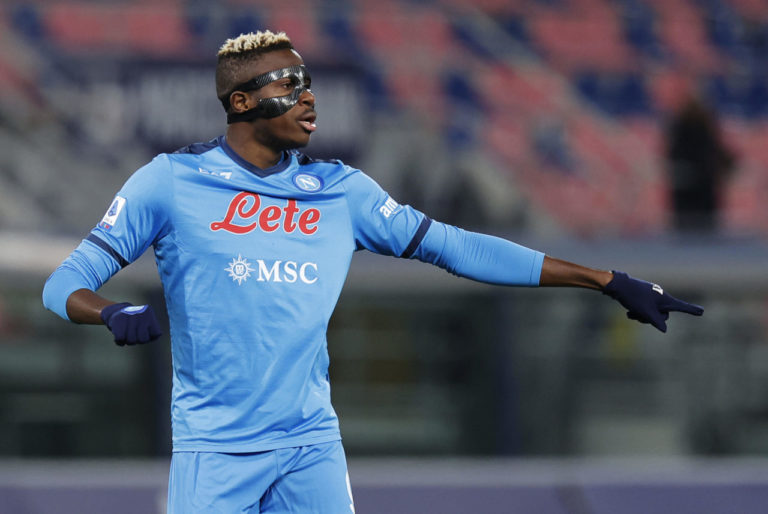 Nigeria’s Victor Osimhen has been named the Serie A player of the month for March. The gangling striker scored four goals in three games for Napoli in the period under review

“The EA SPORTS Player Of The Month award for March has been assigned to Napoli player Victor Osimhen. The trophy will be presented during the pre-match of Napoli vs Fiorentina, scheduled for Sunday 10th April 2022 at 3.00 pm at the “Diego Armando Maradona” stadium in Naples,” a Lega Serie A statement read.

“The ranking was compiled according to the statistical data of Stats Perform (a system patented in 2010 with K-Sport), with the help of tracking data recorded by Hawk-Eye. For the final calculation were considered the matchdays from 28 to 30 of Serie A TIM 2021/2022.

“Victor Osimhen has now achieved the status of one of the most dominant forwards in our league – said Luigi De Siervo, Lega Serie A CEO.

“Physical strength, speed, courage, and determination make the number 9 one of the leaders of Napoli, an absolute reference point of the offensive plots of the Azzurri, as evidenced by the four goals in three matches in March”.

The Serie A award should be an extra motivation for Osimhen who is leading the Super Eagles’ attack against the Black Stars of Ghana in Tuesday’s must-win 2022 World Cup playoff.

Osimhen is among the top scorers in the World Cup qualifying series in Africa with four goals to his name.

He will be looking to add to that tally as Nigeria seeks to seal their passage to Qatar 2022 at the MKO Abiola stadium.

While Osimhen was the player of the month, AC Milan coach Stefano Pioli was named March’s Coach of the Month.