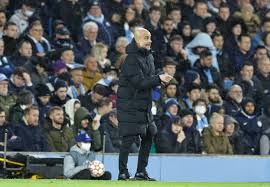 The Citizens had to work extremely hard to keep the Spanish champions out in the away leg of their quarter-final.

After dominating much of the first half, City were penned back by Atleti for the second half, but stood firm and did not allow their opponents to score.

Thanks to their win in the first leg, City qualified 1-0 on aggregate and will face Real Madrid in the semi-finals.

“Absolutely (I am pleased with our mental strength).

“We defended everything. But if they had scored in the last action would the mental strength not be there?

“In this stadium in this competition it is always difficult. It is a big compliment for the players.

“We cannot expect every time to make everything marvellous. We have to suffer.

“I am proud because the opponent was really good. We tried to take the ball but were not able.

“With the people and chances, they had they could have scored a goal.

“They pushed us a lot, they were excellent second half. We forgot to play and we were in big, big trouble. They had chances to score, the second half we had just one.

“The first half was pretty good. They came out aggressively, we had one or two clear chances.

“In the second half of the second leg they were much better but at the same time we defended with everything.

“When a team plays like that we could not have the ball and our build-up was in danger. It is 1-0 in the UEFA Champions League, we are not used to being in this competition much.”