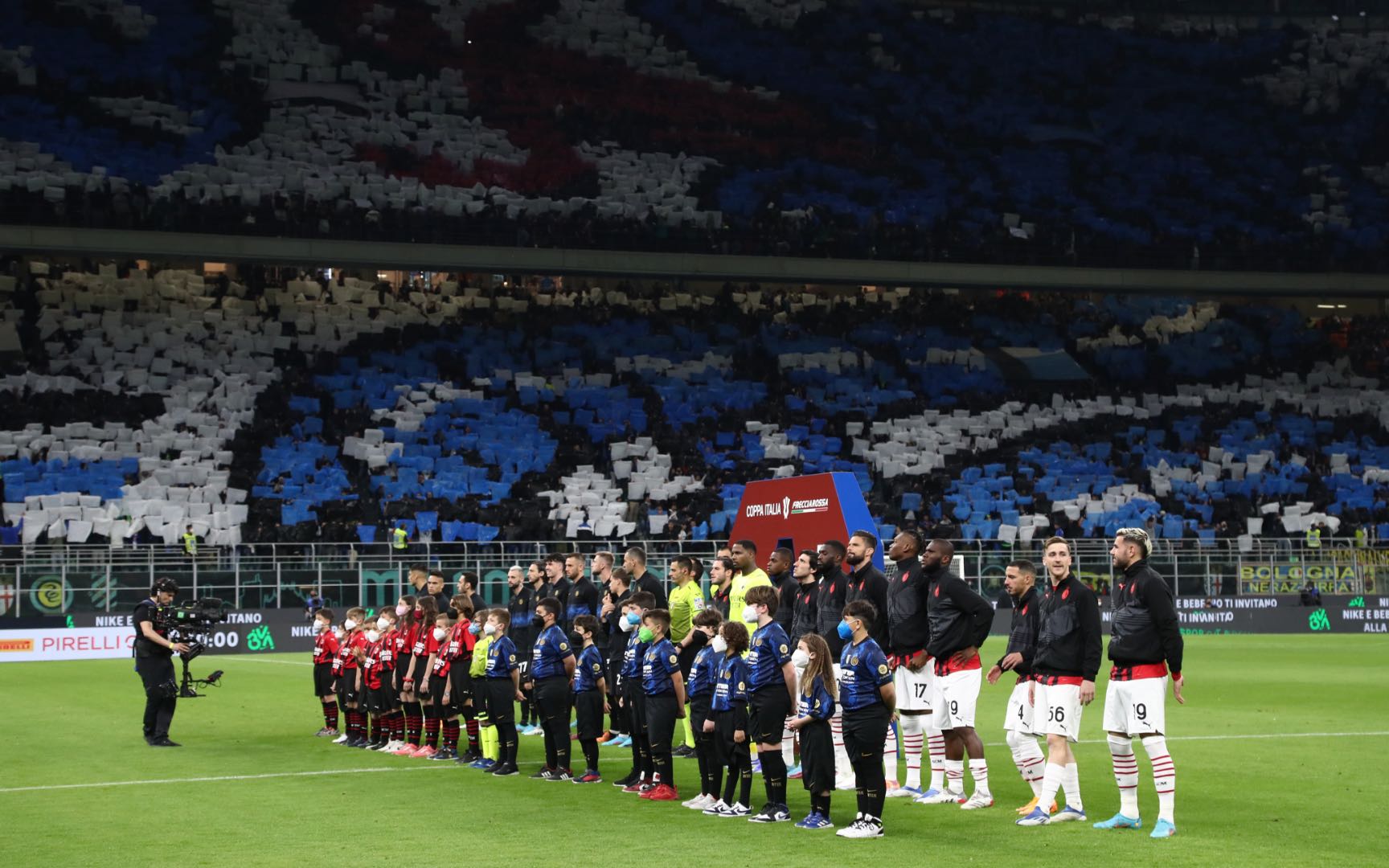 A record-breaking night at the San Siro Stadium on April 19 smiled on FC Internazionale in their fourth confrontation of the season against city rivals AC Milan. In front of a sold-out crowd of more than 74 thousand fans – a record for the Coppa Italia alongside the four million euros earned from ticket sales for the occasion – the Nerazzurri, inspired by a thrilling performance from Argentinian striker, Lautaro Martinez – the undisputed protagonist of the night thanks to his first-half double at the Giuseppe Meazza – reached the final the competition. They will know their opponents after tonight’s match between ACF Fiorentina and FC Juventus.

After a goalless draw in the first leg of the semi-final, Inter Milan – the home team for the night – needed a victory in order to reach the final stage of the Coppa Italia: since the away goal rule is still being used in this year’s edition of the competition. In fact, a draw with at least one goal for each side would have rewarded the Rossoneri, as it happened 19 years ago in the 2002-2003 edition of the UEFA Champions League when AC Milan reached the final at Old Trafford after a double draw against the Nerazzurri (0-0 in the first leg, 1-1 in the second leg).
In the incandescent atmosphere of San Siro it took only four minutes for Lautaro Martinez to find the back of the net for the first goal: a perfect first touch from the edge of the penalty area by the Argentinian striker – propitiated by Matteo Darmian’s assist from the right – was enough to beat AC Milan goalkeeper Mike Maignan, giving to the Nerazzurri the lead.

Despite conceding an early goal, AC Milan showed great spirit and effort in order to find the equaliser, creating the perfect conditions for an exciting match. Rafael Leao found the best opportunity for the Rossoneri in the first half in the 28th minute, thanks to a classy play by Leao from the left. But Simone Inzaghi’s team put organisation, dynamism and a competitive attitude into their game, holding Stefano Pioli’s team back from other concrete opportunities.

Eventually, by the end of the first half, Inter doubled the score. Everything happened within a minute at the Meazza: at first, AC Milan nearly equalised twice, thanks to Kessiè and Leao’s efforts, but Inter were saved in both cases before hitting on the counterattack, where Correa then served a splendid low-shot assist to Lautaro, who overtook Maignan with a digging touch to overcome the French goalkeeper. Thanks to that, Inter doubled the score on 41 minutes, thanks to the one-man show displayed by Lautaro Martinez.

For the second half, Stefano Pioli left Tonali and Saelemaekers in the changing rooms, opting for Messias and Diaz to give more fantasy and dynamism between the lines. The beginning of the second half was more balanced than before, with more opportunities for the Rossoneri. Eventually, Ismael Bennacer scored for AC Milan in the 66th minute thanks to a fancy first-touch shot from the distance to beat Inter goalkeeper Samir Handanovic, but the VAR check – which lasted more than three minutes – cancelled the goal because of the offside position by Fikayo Tomori that obstructed Handanovic’s view.

After the controversial episode, Simone Inzaghi’s team was able to manage the rest of the game and eventually scored the third goal that ensured victory for Inter Milan. The gol came in the 83rd minute, after another perfect counterattack, where Croatian midfielder Marcelo Brozovic perfectly served the German midfielder Robin Gosens, who scored found his first goal in the Nerazzurri jersey.

Stefano: The excitement of more than 74 thousand spectators, after two years of waiting for full capacity because of Covid-19 measures, made the entire stadium literally shake. The choreographies displayed by both teams showed why the Derby di Milano is unique in the international football landscape, involving thousands and thousands of fans in a true celebration of football itself.

A second, outstanding show that rivalled the one on the field was shown on the seats by the ultras from both teams: after having shown the two outstanding choreographies before the kick-off they never stopped singing for all 90 minutes of the game. Truly a magnificent experience that the media struggle to describe properly.

Azra: For the first time, since the pandemic began, the derby in the city of Milan is witnessed by more than 75 thousand spectators. A choreography of lights before starting the game indicated that the show was beginning and the choreography of the fans of Inter and AC Milan, made the hair stand on end. The chants of the “Curva Nord Milano” and the “Curva Sud Milano” did not stop until the end of the match, causing great pressure for the players, but a very special atmosphere for the fans.

SERVICES FROM THE PRESS FACILITY

Stefano: The services provided by the San Siro staff were good, showing another certificate of professionalism and excellence that the stadium provides for such an occasion. From the anti-Covid-19 and security checks to the internet connection, the San Siro staff members are well prepared for every need, answering questions properly and giving good explanations.

Although the huge number of journalists – more than 200 from several countries – the seat and the station were comfortable to work in. Personal Wi-fi credentials were given at first to every journalist and media employee, with an easy and manageable system to log in in order to benefit from the internet connection. Despite thousands of people gathering at the stadium for the occasion, the connection was stable throughout the match. Also, a lunch box was given to all journalists.

Azra: The services offered by the stadium are quite good. The press facility itself – located in the middle of the grandstand of the stadium – is easy to reach for journalists and media employees in general, with several escalators and clear indications to ease the access to the facility itself.

When you arrive at your position in the press area, the first thing you find is a lunch box with food and drinks. Considering the large number of people present in the stadium, the internet connection is good. The strong point is that the staff is always available to journalists if they have any questions or problems.