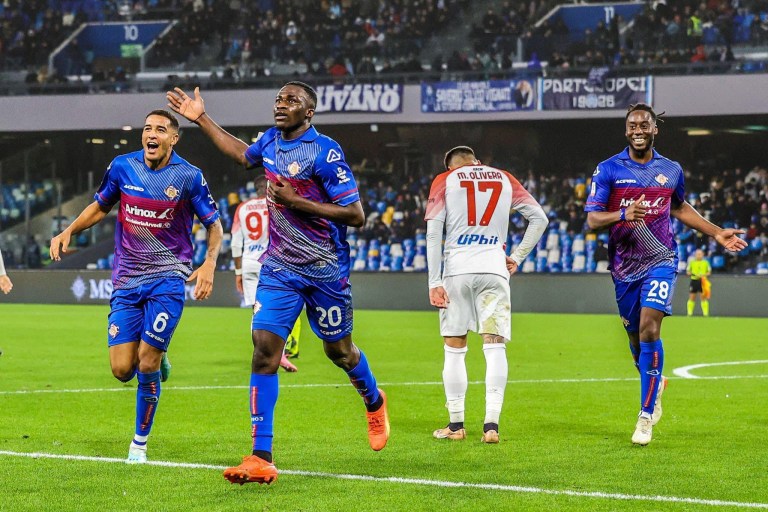 Ghanaian striker, Felix Afena-Gyan, was the star of the night as Cremonese knocked out Napoli from the Coppa Italia on Tuesday, to reach the quarterfinal.

The 19-year-old was brought on as a substitute in the 65th minute and scored a crucial equalizer, sending the match into extra time.

He then sealed the victory for his team by scoring the winning goal during the penalty shootout.

Cremonese had taken the lead in the first half through Charles Pickel, but Napoli fought back with goals from Juan Jesus and Giovanni Simeone.

However, Afena-Gyan’s late goal kept Cremonese alive and later scored the winning kick as they ultimately sealed the win in the shootout.

The striker, who recently joined Cremonese, has now scored two goals for the club, all in the Coppa Italia.

Just three days after being appointed as coach, Davide Ballardini steered his side to a huge upset as 10-man Cremonese eliminated Napoli from the Italian Cup on Wednesday.

Cremonese won a penalty shootout after playing most of extra time with 10 men after the match finished 2-2. It will face Roma in the next round.

Napoli midfielder Stanislav Lobotka was the only player to miss a penalty as he sent his spot kick wide in the pouring rain at the Stadio Diego Armando Maradona.

It was Ballardini’s first match in charge of Cremonese after being hired on Sunday to replace Massimiliano Alvini, who was fired after 11 losses in 18 league matches.