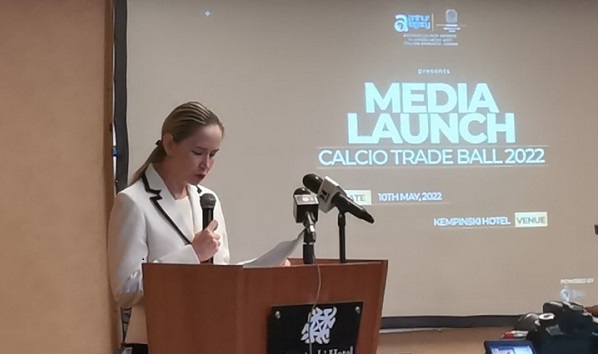 The Italian Ambassador to Ghana, Daniela d’ Orlandi, has called for the deepening of the long standing relationship between Ghana and Italy, particularly with respect to football.

She recalled that the special relationship between the two counties dated back to 1991 when the Black Starlets won the FIFA/JVC Under-17 World Cup in Italy. And over the past three decades some of Ghana’s finest players, including Asamoah Gyan, Stephen Appiah and Sulley Muntari, started their professional careers with Italian sides, while Ghana’ Black Stars was once handled by the Italian tactician, Giuseppe Dossena, from 1998 to 2000.

“Ghana and Italy have a lot in common when it comes to football and this experience has provided me a reason to support the sporting activity in all ways possible,” she said at the launch of the third Calcio Trade Ball in Accra.

The Calcio Trade Ball is organised by the football agency, Arthur Legacy, in partnership with the Italian Embassy and provides a platform that brings Ghana and Italy together to celebrate football, trade and cultural exchange.

This year’s event was launched by the Minister of Youth and Sports, Mustapha Ussif, who called for more collaboration between Ghana and Italy to harness the best soccer talents for the development needs of both countries.

The CEO of Arthur Legacy, Oliver Arthur, said this year’s event would feature a seminar to educate football agents on how to curb the exploitation of players ahead of the annual awards night.

The seminar, dubbed: ‘Stop the exploitation, save football’, will be held at the Kempinski Hotel in Accra on June 16.

Mr Arthur revealed that the exploitation of African players had become a common practice which mostly affected the growth and development of the players significantly, hence the need for education on the subject.