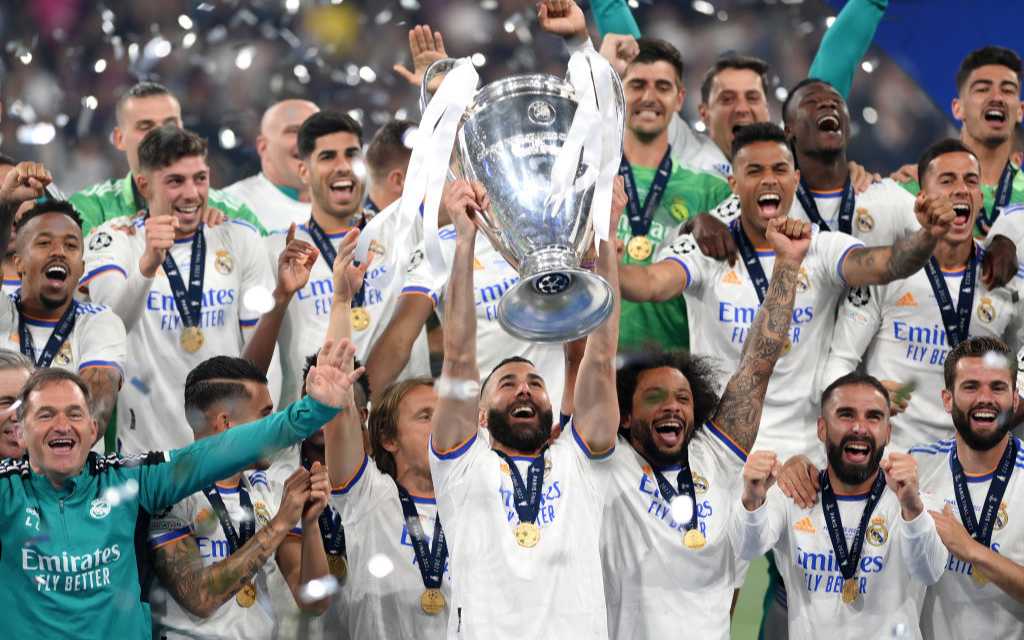 Real Madrid extended their record to 14 Champions League Cups after beating Liverpool 1-0 in a final delayed for 36 minutes after organisational confusion outside the Stade de France.
Madrid’s high-class management of the match was founded on the brilliance of goalkeeper Thibaut Courtois and crowned by an opportunist counter-attacking goal from Vinicius Junior early in the second half. Liverpool thus bowed to the Madrid maestros, just like Premier League rivals Chelsea and Manchester City in the previous rounds.

This was Madrid’s fifth win in eight years. They might have asked: “Who needs Kylian Mbappe?” after the young French superstar had turned down their transfer offer at the start of the week. Coach Carlo Ancelotti summed it up by saying: “We had a fantastic season with a very good squad.”

That was a typical understatement from a veteran coach who had just seen his team deliver his own record fifth success in the world’s most prestigious international  club competition.

Liverpool, so recently dreaming of a quadruple, were left with the comparative deflation of just the English League Cup and FA Cup double, and even those won only on penalties.

However, when it comes to post-mortems, European federation UEFA and the French authorities must seriously examine their own roles over the crowd control issues before the game.

The Madrid end of the stadium was filled up an hour before the final but Liverpool fans found accessing the venue hard work amid reports of closed gates and security forces using tear gas to control the situation. UEFA blamed fans with fake tickets but clearly there was more to it than that.

Originally, of course, the final was not supposed to have been in Paris. It had been scheduled for St Petersburg but Russian President Vladimir Putin’s military invasion of Ukraine put paid to that.

Liverpool had been aiming to win their seventh European Cup, and register a third Champions League triumph but instead it was Madrid who claimed the trophy for a 14th time and an unbeaten eight in the UEFA Champions League era, both competition records.

Manager Jurgen Klopp’s Liverpool had approached the duel inspired not only by a will for revenge for their defeat by Madrid in 2018 but by the ambition to make amends for having been edged out by Manchester City in the Premier League title race.

Unsurprisingly after the delay the opening exchanges were scrappy. Liverpool’s high line meant they looked the more aggressive but Madrid were unable to take advantage. As the match developed so Liverpool took command.

Mo Salah had a jabbed close-range effort saved by a diving Courtois and then the goalkeeper had to pull off two further, more comfortable saves from the Egyptian. The Belgian was beaten in the 20th minute by Sadio Mane but the ball struck the keeper’s right hand post and he was able to twist back and grab the loose ball.

Liverpool continued to press. Courtois’s positioning and safe hands denied Salah a headed effort and, all the while, Madrid continued playing in a different rhythm, searching to provide left-winger Vinicius with opportunities to test Liverpool’s pace and covering.

For all that, it was Madrid who were first to put the ball in the net through Karim Benzema just before halftime. An inordinately lengthy wait for the VAR check eventually rescued Liverpool with an offside ruling.

Liverpool pressed forward with serious intent again after the interval but it was Madrid who took a decisive lead in the 59th minute. They broke sharply out of defence, Federico Valverde fired across goal, Karim Benzema let the ball run and Vinicius sneaked in behind Trent Alexander-Arnold to tap in.

Toni Kroos, Casemiro and the brilliant Luka Modric led the midfield smother in front of the excellent Courtois who brought off another well-judged save from Salah as Liverpool chased the game.

Casemiro misjudged his shot on another Madrid break before Klopp brought on Naby Keita and Roberto Firmino into the fray. Firmino made an immediate impact but first Courtois to dived left to foil Jota then he saved superbly again from the luckless Salah.

Madrid were kings of Europe yet again – and so was Ancelotti who can now boast six Champions Cups – two as a player, four as a coach.