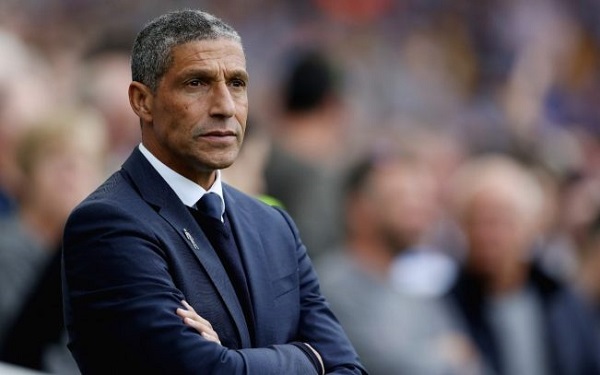 Chris Hughton hopes to help Ghana build the “best team possible” before the World Cup in Qatar, and is keen to encourage members of the diaspora to join the national squad.

London-born Bristol City striker Antoine Semenyo is expected to make his debut for the Black Stars in upcoming Africa Cup of Nations qualifiers after the 22-year-old received his first call-up.

Meanwhile, Brighton’s England Under-21 international Tariq Lamptey is considering a switch of allegiance to the West Africans and Chelsea winger Callum Hudson-Odoi and Arsenal striker Eddie Nketiah are two other players with Ghanaian heritage who have reportedly been targeted.

Hughton has been working as a technical advisor with the Ghana Football Association since February, assisting head coach Otto Addo.

“It’s something that I’ll certainly get involved in the dialogue with,” Hughton told BBC Sport Africa.

“This is something the Ghanaian Football Association have been involved in for a while. So on the conversations that I might have, as regards a player that has Ghanaian parentage, the Association are fully aware and also Otto’s somebody who is very much on the pulse.”

Lamptey is on holiday and doing charity work in Ghana, having turned down a call-up for England U21 games in June.

He is expected to watch the Black Stars host Madagascar in Cape Coast on Wednesday in their opening Group J qualifier for the 2023 Nations Cup in Ivory Coast.

After missing out on the 2018 World Cup in Russia, Ghana will face Portugal, South Korea and Uruguay in Group H at this year’s finals in Qatar in November and December.

“There are players that are playing outside of Ghana in European countries, predominantly, that do qualify,” former Newcastle and Brighton boss Hughton, 63, added.

“The world is changing and there is far more travel between various countries, and far more individuals being brought up in a different country to what they were born in, or their parents were born.

“That is something the FA will always have their finger on. We have to have the best team possible going forward. And if that means opening out the network, then is it is our responsibility to to do that.”

Hughton can offer ‘encouragement and guidance’

Hughton speaks from experience of having a choice of national sides, having been born in England to a Ghanaian father and Irish mother.

The former Tottenham Hotspur defender won 53 caps for the Republic of Ireland – playing at the 1988 European Championship and being part of the squad for the 1990 World Cup.

“I had just broken into the Spurs side, I think I’d only played half a dozen games, I’d started the season really well,” he said.

“Ireland came and asked me if I would be interested in playing. And I said yes – it was international football.

“And it was the decision that, in hindsight, I’ve never regretted making. I played for a 10-year period, was fortunate enough to go to a European Championship and a World Cup,

“It developed me as a player and as a person. And I think I’m in a good position to give some encouragement, guidance, experience, and what it did for me.”

However, the full-back could easily have represented the Black Stars.

“My Ghanaian side was a strong part of me as well,” he said.

“But yes, certainly, if Ghana had come in at the time [I could have played].

“I made my debut for Republic of Ireland in 1979. And Ghana, since then, have qualified for World Cups. Times were different then but yes, it could have been a possibility.”