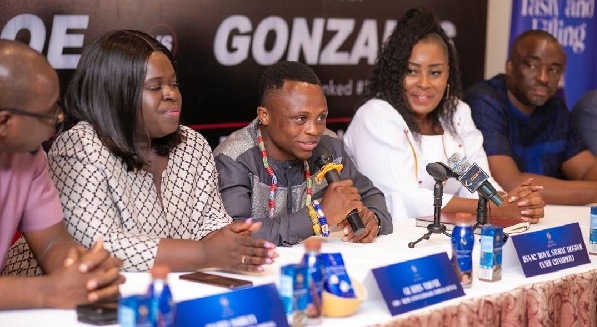 The partnership allows the indigenous cocoa processor to leverage the brand and appeal of the featherweight boxer to market the NICHE Chocolate Drink while it provides financial and other forms of support to him in his boxing endeavours.

The deal was unveiled Monday at a press conference that also saw the announcement of Joet Gonzalez as Dogboe’s next opponent.

Also called Royal Storm, the featherweight boxer is expected to make his return to the ring on July 23 against the American opponent in a bout that could see him showcase the NICHE products and brand to the whole world.

The ready-to-drink NICHE Chocolate Drink is sourced from Ghana’s premium cocoa beans and prided as enriched in vitamins, minerals, the goodness of cocoa as well as tasty and a filling to consumers.

NICHE Confectionery is a subsidiary of NICHE Cocoa Industry that was founded around 2011.

Addressing the media at the partnership unveiling, Dogboe explained that he was glad to have seen a corporate entity express such interest in him.
He said it was a motivation for him to continue working harder.

He thanked all boxing stakeholders for their diverse roles in seeing his career grow to this level and promised to make the NICHE Chocolate Drink brand a success by winning his bouts.

“This is one of the happiest days of my life because to see a company such as NICHE Confectionery Ghana Limited coming on board to support me means all these years of hard work have paid off.

“I have to continue thanking all stakeholders in the Ghanaian boxing circles who have played several roles to get my career to where I am now,” said Dogboe.

Gladys Amoah, Managing Director of NICHE Confectionery, explained that her outfit decided to partner with Dogboe because of the formidable nature of the ‘Dogboe brand.’

She said it formed part of the company’s commitment to helping develop talent as well as bring back the love that Ghanaians have for boxing.

Dogboe poses with some fans at the event

Mrs Amoah said cocoa was known to offer high nutritional value to people and its increased consumption was recommended for vitality and brain development.
She said cocoa was also a good source of nutrients for sportsmen and women, especially during periods of recuperation.

According to her, the NICHE Chocolate Drink was specially formulated from Ghana’s premium cocoa to serve a drink and a beverage, especially for people on the go.

She noted that NICHE Confectionery celebrated the boxer’s successes in boxing, having worked his way back to the top.

She said they were convinced that the NICHE Chocolate Drink would help to drive the initiative and aid him to climb even higher.

“Isaac Dogboe represents what our vision for the beverage is which is the nutritional value it adds to every sportsman and woman’s career.

“We are proud of the successes over the years and the courage to comeback stronger from his setback and we are convinced that we can be part of his future,” she said.