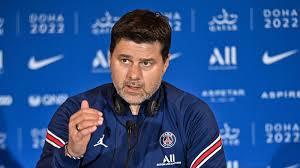 Paris Saint-Germain reportedly wanted Manchester United to make Mauricio Pochettino their next manager to avoid the now-costly sacking of the Argentine.

United began last season in strong fashion, with Cristiano Ronaldo’s return adding to the optimism. However, Ole Gunnar Solskjaer’s fate soon turned and he lost his job in November.

The Red Devils eventually went with an interim successor in Ralf Rangnick. But that decision came after they supposedly failed with an enquiry about bringing former Spurs manager Pochettino in.

Manchester United never truly rekindled their interest in the Argentine and instead opted to appoint ex-Ajax boss Erik ten Hag.

Pochettino’s future has been unclear the whole time, with his end-of-season sack consistently mooted.

According to The Telegraph, PSG will now sack their manager – but wish United would have struck an agreement with him.

Indeed, Pochettino still has a year left on his contract so he and his staff are due a €20million pay-off.

The newspaper adds that Pochettino’s sour relationship with PSG started well before the Champions League collapse to Real Madrid.

PSG bosses became frustrated that the 50-year-old was flirting with a return to Spurs last summer.

Pochettino had privately called for an overhaul at the top of the club, which bosses are now undertaking. Sporting director Leonardo is on the way out, with Luis Campos in as a football advisor.

As for Pochettino‘s future, The Telegraph adds that he wants to return to the Premier League in his next job.

He failed to win a trophy in his five-and-a-half-year spell in north London but came close in the top flight and the Champions League.

It remains unclear which club would be open to bringing Pochettino back. Spurs would have been interested had they not gone for former Inter boss Antonio Conte after sacking Nuno Espirito Santo.

Pochettino, who managed Southampton before Spurs, has taken charge of 256 Premier League games.

Man Utd get to work with Ten Hag

Man Utd, meanwhile, are getting to work with their new manager.

Ten Hag has a lot of work to do to transform the Old Trafford club’s fortunes, starting with this summer’s transfer window.

The Dutchman is taking inspiration from his former club, targeting the likes of Jurrien Timber and Frenkie de Jong.

But there is certainly a lot of talent to work with in the United ranks as it stands, and Ten Hag must get the best out of both approaches.