FEATURE: Much ado about match-fixing 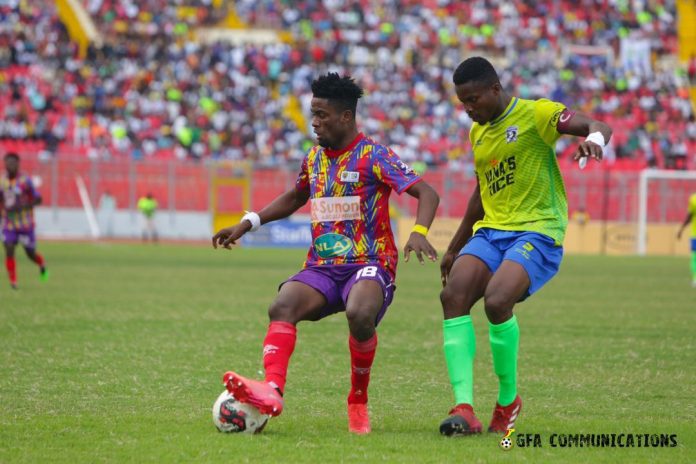 I am very much interested in the history of Ghana sports especially football; this is the reason why I would like to attempt to trace the history of fixed match allegations that have gained currency in the just ended National Football League.

It is pertinent to note that since its inception in 1958, the football league until quite recently had been the only national programme uninterrupted by the numerous political changes in the country.

It was the highly contentious investigative crusade by Tiger Eye investigators that disrupted this progressive national pastime for two years before sanity was restored in 2020.

This episode merits a whole coverage another time but suffice to say the just ended Ghana Premier League was the second after the so-called chapter X exposure.

As I was saying, the national league, mooted by that illustrious sports administrator, Ohene Djan started extremely well in 1958 with Accra Hearts of Oak, the oldest existing top division club, winning comfortably. As widely predicted close rivals Asante Kotoko won the second edition in 1959 followed in 1960 by Sekondi Eleven Wise in a sensational and dramatic manner having placed bottom of the table the previous year.

It was a remarkable recovery from the previous season where, out of 14 matches, Eleven Wise lost ten, drew twice and won two in an eight-club competition.

The sensational aspect of Eleven Wise’s triumph in 1960 was the fact they were leading Kotoko by only one point by the time of the last match and needed the two points to win the cup.

Believe it or not, Hasaacas drew 1-1 with Eleven Wise and Cornerstone beat Kotoko 2-0.

Hasaacas, affectionately called Giants of the West, nearly succeeded in dashing the championship hopes of Eleven Wise, the Western Show Boys. The Giants took a confident lead for 84 minutes before Edward Acquah, the man with the sputnik shot, revived the spirits of Eleven Wise, five minutes to full time.

With fingers crossed, Eleven Wise waited impatiently for the result of the Kotoko-Corners match in Kumasi. Then the news flashed, Kotoko had been beaten 2-0 by Corners. It was a huge carnival in Sekondi. The celebrations went throughout the night to mark the momentous occasion.

That was a fitting climax to an exciting league and it was apparent at the time “match fixing” was not in the vocabulary of the Ghanaian football fan.

The hint of a probable first ever fixed league match in Ghana was in the 1961-62 outstanding match between model club Real Republikans and Hearts of Oak at Accra Stadium.

It is recalled that Sports Director Ohene Djan had forcefully formed a model club, Real Republikans comprising reputed stars from the existing clubs aimed at building a strong national team.

The snag was the team was so strong Ohene Djan himself realised it was not fair competition matching them against those weakened clubs in a serious competitive national league.

So, typical of the great strategist that he was, Ohene Djan decided Republikans would play the league on non-scoring basis but there was a caveat; any club can beat them for the points at stake.

And so it came to pass that Republikans had a final deciding match against Accra Hearts of Oak that the Phobians, just a point behind leaders Asante Kotoko, needed to win to capture the league trophy.

The background was that Asante Kotoko and Republikans were sworn enemies. Kotoko were the most outspoken against the formation of Republikans, having lost the great Baba Yara and central defender Dogo Moro to the model club. Indeed, Kotoko had even threatened to quit the league if they did not have their two stars back.Ohene Djan had called their bluff and quickly formed a Kumasi United club to replace the fabulous porcupines.

It was after tense secret negotiations that brought Kotoko back into the league. But daring to rebel in the first place, Kotoko were forced to play all their first round home matches at the Nkawkaw CYO Park.

It was obvious Republikans would not do Kotoko any favours by beating Hearts so the 2-1 victory for Hearts was regarded in football circles as a fixed match.

In fact, some football historians maintain the Hearts-Republikans match was the first match fixing incident in Ghana and it was officially sanctioned by pointing accusing fingers at Ohene Djan since he was the sole controller of Real Republikans affectionately called Osagyefo’s Own Club.

This writer was at the Accra Stadium that day and honestly, from the trend of play, all seemed normal to me which confirms my stand that it is not that easy to detect a fixed match unless it is so glaring like what we witnessed in the 1988-89 season.

On that occasion, two relegation threatened clubs, B.A. United and Sekondi Hasaacas, scored a total of 39 goals without reply from their opponents. Hasaacas trounced local rivals Eleven Wise19-0 in Sekondi and B.A. United thrashed Henry Ameyaw’s Accra based Man U 20-0 in Sunyani.

There had been wild speculations that the matches were going to be fixed. The incredibly high goal tally no doubt confirmed the rumours.

In the aftermath, the GFA declared the results of the matches null and void. All the four clubs lost their share of gate proceeds and were suspended for six months from all competitions organised by the GFA. In addition, each of the four clubs were fined 250,000 cedis to be paid within ten days.

All the clubs except Man U paid the fine within the stipulated time. Man U were banned for two years by the GFA. In a later development, all players and officials connected with the said matches on the day were banned for one year.

All the sanctions were however lifted after six months by the then Secretary for Sports, Kwame Saarah-Mensah who said the action had been taken following serious considerations of the appeals by the public and the clubs’ own remorse.

Earlier in the 1985-86 season, there was a funny scene at Nkawkaw on the last day of the league when fans run onto the pitch and asked for a refund of their gate fees and abruptly halted the match between Okwawu and Techiman Holy Stars in the 32nd minute. Their beef was that the match lacked the competitive spirit. In the midst of the confusion Class One Referee S.S. Effah called off the game. Okwawu were leading 3-0, at the time of the incident and were awarded the three points at stake.

Football continues to be an unpredictable game that’s why so much money is derived from the pools by well organised companies. There should be no room for ruffians who want to manipulate the system to spoil the fun.

I still believe it’s not easy to detect a fixed match. You need to have empirical evidence. The gurus in the sports industry say without shocking and surprising results, competitive sports will cease to be an attraction.

It’s all well and good if a scientific method could be found to detect these so called fixed matches. In the meantime, we should be slow in branding some matches as fixed. We should remember the modern world is becoming so crooked that you cannot believe all that you see. Let’s continue to preach the principle of fair play and hope for the best.

I would like to plead with my fellow sports fans to continue to look at the brighter side of sports as a unifying factor. It’s still a recreation. Not a matter of life or death.

Let’s all try to show respect to the practitioners because it needs a lot of sacrifice and determination to reach the top. Ask those who know it and you will minimise all the negative thoughts about sportsmen and sportswomen.