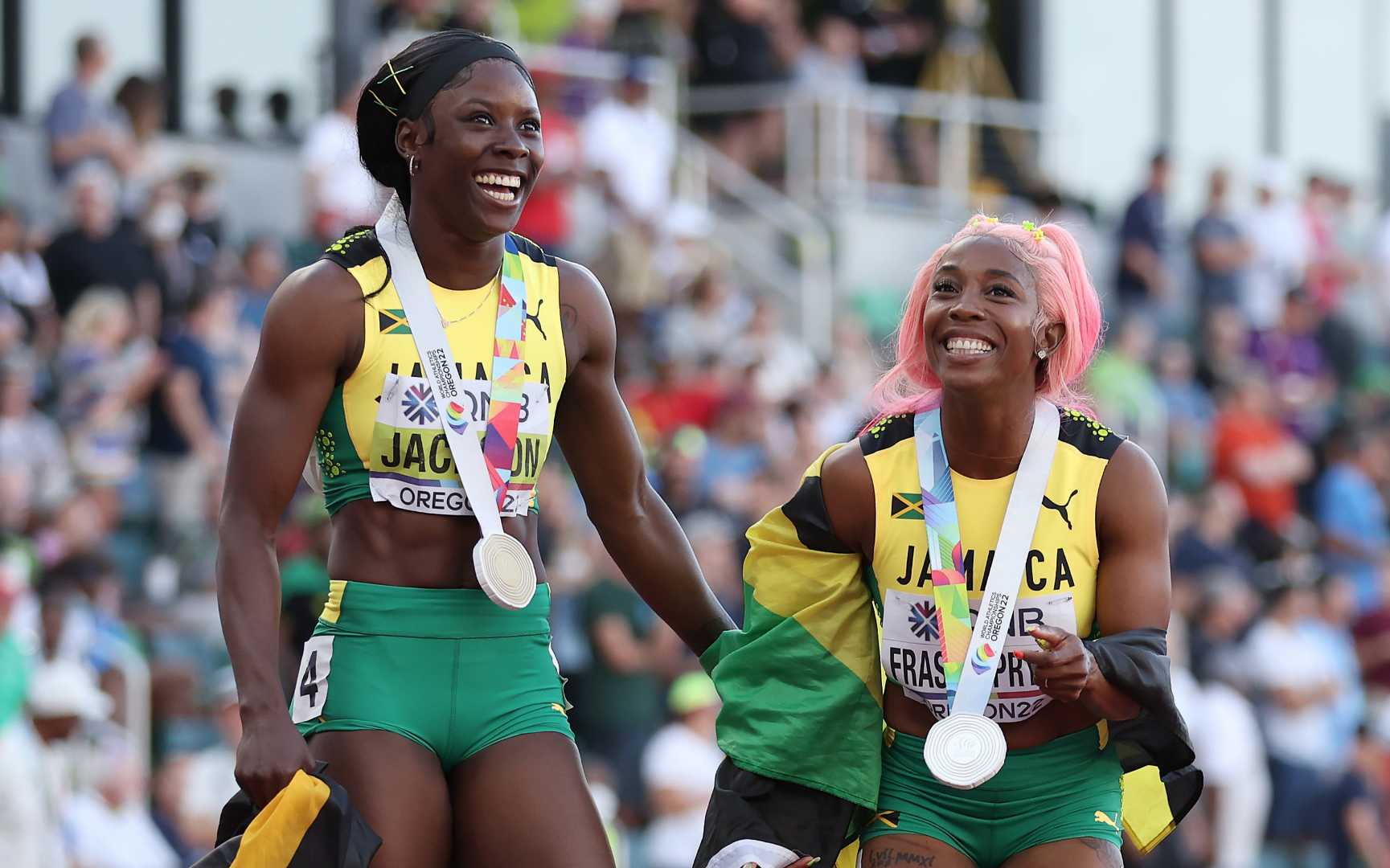 After the sweep in the 100m final, the Jamaican women were also successful in the 200m final. Only one British provided variety on the podium.

GRATEFUL Shericka Jackson is the new world champion in the women’s 200m. The Jamaican won with a national and championship record of 21.45sec. “I am really excited. First gold medal, national record, I am so grateful. We were hoping for another 1-2-3. We are so grateful for the 1-2. We came here to do our best and our best was good enough. We did win two big medals for the country,” said the 28-year-old with a big smile in her eyes. Shericka Jackson ran 21.67 in the 200m semi-finals, the fastest semi- final ever at the World Championships.

Fraser-Pryce: I have to thank all the  people of Jamaica

A GOOD RUN Her teammate and 100m world champion Shelly-Ann Fraser-Pryce (SB, 21.81) also walked through the mixed zone at Hayward Field with a big smile. She was first asked about her newly chosen pink hair colour then a brief small talk with the journalist from Jamaica ensued. “Speaking of the 200m final, the 35 years old sprinter said: “Listen, My legs are tired. I was really, really tired physically and mentally and still I wanted to come out and have a good run. This has always been an event that challenges me. What would that be if I did not challenge myself at these championships… I got lane six, I was like, all right Shelly. All the girls were behind me. So I got to get off like nobody and I really tried my best to win it and I am so grateful for the gift that I got. Because I am telling you, it is not easy. It is a hard work and dedication. I have to thank all the people of Jamaica, my family, my coach, my training partners, my sponsors. I could not have asked for better support.” Her 21.81 sec was the 2nd fastest mark-for-place at the World Championships, after the 21.66 run by Elaine Thompson-Herah in 2015 – by the way the 100m bronze medallist gave no interviews, after her 7th place in the final (22.39sec), which is the best ever mark-for-place at the World Championships.

Dina Asher-Smith from Great Britain could not defend her world title but she still got on the podium this year with 22.02sec – the 2nd fastest mark-for-place at the World Championships. “I am so happy, it was crazy, but I am so happy,” Asher-Smith said even before a journalist could ask the first question. “I knew I had to run, like my life depends on it, if I want to have a chance. And I am so happy,” said the beaming bronze medal winner. Physically, the 26-year-old is in good shape, as she herself admitted. “Sadly as a family, we lost my grandma, just before diamond League. I felt like I was just watching myself doing some stuff, it was such a strange thing to do it. It is just that psychological element which is so important. It was honestly a uniquely challenging season.”

“Lucky Number 5” for US champion Steiner

For US athlete Abby Steiner it was her first meet of any kind going against the formidable Jamaican trio of the 200m. With 22.26sec she got 5th. “I was very happy to finish fifth in world after this season,” Steiner mentioned. It was her 55th race of the year following a stellar collegiate season. “I guess it was lucky number 5,”Steiner said in an exclusive AIPS interview. After the World Championships, the 22-year-old wants to take a short breather and then return to training highly motivated. For US journalist and track and field expert Ken Goe, Steiner is one of the top favorites to win a medal in the next few years.

“Two medals would be great,” David Riley, president of the Jamaican Track & Field Coaches Association, had stated in an exclusive interview with AIPS before the race. And he was right. He does not believe there will be a big party tonight on the streets of Jamaica, but appreciates the performance of this generation of sprinters. Shelly-Ann Fracer-Pryce had underlined the success of Jamacan team after the sweep in the final of the 100m. Especially because three different coaches are in charge of the three top stars. Behind that success is a coaching system. David Riley explained why it works so well in Jamaica:

PARTICIPATION “A lot of it has to do with the system that encourages participation, and participation is available at all levels of the sport, whether you’re 10 or 15 years old. There are a lot of competitions. If you have any talent, you will be discovered in Jamaica. There are so many people who see your talent. It’s a very well-developed system.” There’s also mentorship from living legends, personal motivation and good coaching. Jamaica is a small island, with a population of about 3 million. So the chance of a recruiter spotting an up-and-coming track star is almost inevitable. Whether this Golden Generation is just a temporary or long-term are running, Riley doesn’t like to judge. “The sport is changing. Performances on the world stages are going crazy right now, even at the junior level. So you don’t know what’s going to happen.” For him, however, it is also clear that the Jamaican system still needs to evolve.

“There are actually some issues, especially in the support system off the track, in medical, in recovery treatment. Improvement in the individual aspect of the training programme. Smaller groups for the trainers so they can focus even more on the individual.