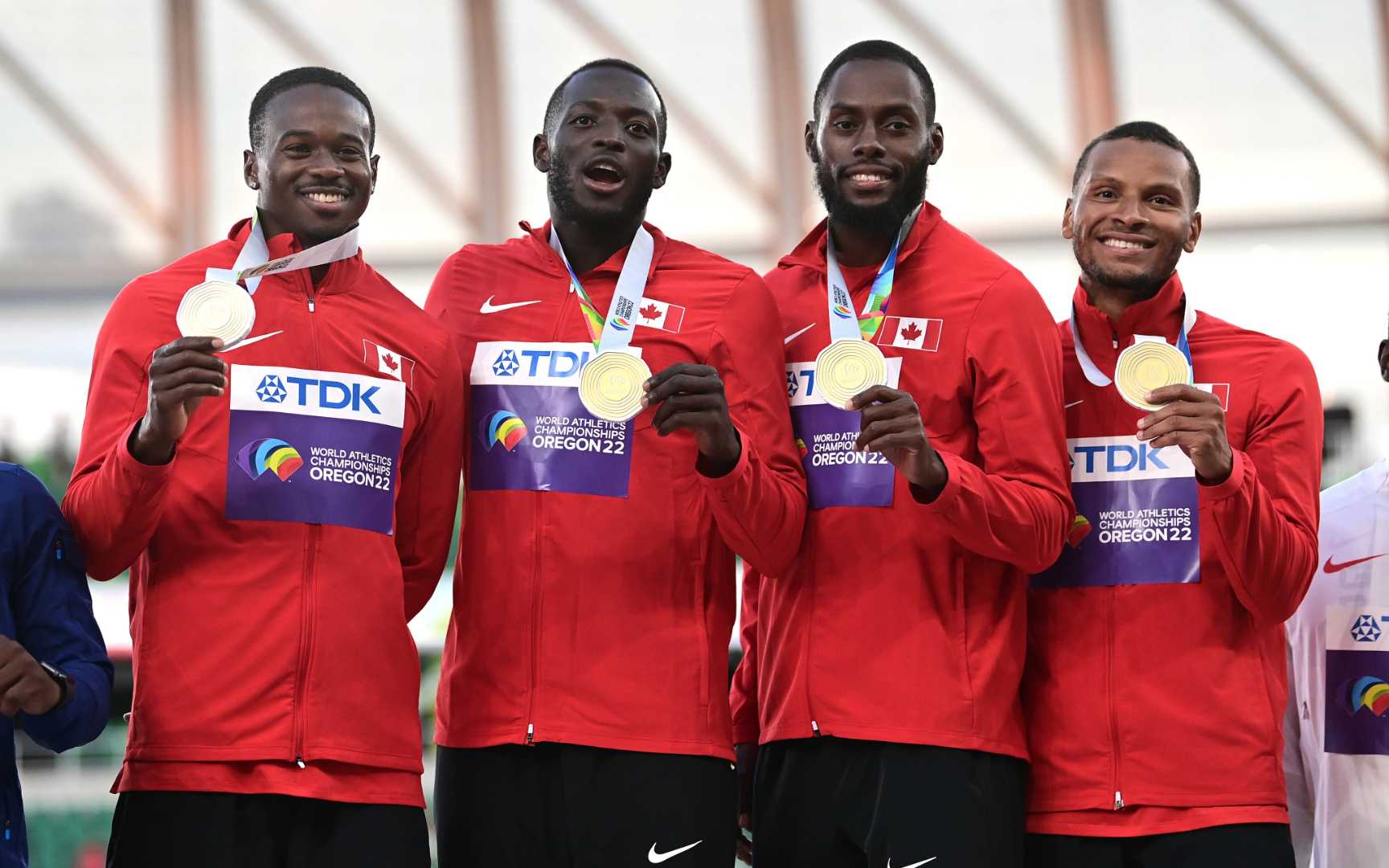 Having recorded clean sweeps in the men’s 100m and 200m events at the World Championships in Eugene, all eyes were on the United States, backed by their boisterous crowd, to dominate the men’s 4x100m relay, but it was Canada that came through with a shocking victory on Saturday night. The last time Canada won this event  at the Worlds was 25 years ago when Robert Esmie, Glenroy Gilbert, Bruny Surin and Donovan Bailey captured gold in Athens  – a year after winning the Olympic title in Georgia at the 1996 Olympics.

At Hayward Field in Eugene, Oregon on Saturday 23 July, another Canadian quartet of Aaron Brown, Jerome Blake, Brendon Rodney and Andre De Grasse ran the race of their lives to beat the defending champions USA in a world-leading, Canadian record of 37.48 seconds.

The reigning Olympic 200m champion Andre de Grasse, who ran the anchor leg for Canada said: “I was hoping not to get caught. I was tightening up a little bit. Once these guys did the work, I just had to make sure I stayed relaxed. I got the baton from Brendon and brought it home. We spoke about this moment so many times, waiting for the gold medal. It feels good to get it done and we are hoping for more in the future. With many of us being more fresh, me not running six races, Brendon coming here for the relay also helped us. We were able to practice the relay more. We had that team chemistry. It’s special to win here. There are many Canadians cheering us on. It’s not on home soil, but it felt like it. After injuries and COVID, it was great to finish the championships like this.”

The United States, with Christian Coleman, Noah Lyles, Elijah Hall and Marvin Bracy, finished second in a time of 37.55, while Great Britain , with Jona Efoloko, Zharnel Hughes, Netheneel Mitchell-Blake and Reece Prescod, won bronze with a time of 37.83.

De Grasse, who had COVID-19 less than a month ago, stunned the fans at Hayward Field when he outran Bracy to cross the finish line first. He finished in a time of 8.79 – as against Bracy’s 8.95 – to bring it home. At the World Championships in Eugene, he sat out the 200m so he could be well rested for the relay and his sacrifice has paid off.

Esmie, Gilbert (the current Athletics Canada head coach), Surin and Bailey were Canada’s sprint relay dream team in the mid-90s, winning the 1995 and 1997 World Championships with the 1996 Olympic gold medal in between.

So it was indeed a special feeling for Canada to experience that joy again after over two decades. De Grasse threw his hands in the air as he crossed the finish line.

Aaron Brown, who ran the first leg said: “I lost my voice. I was screaming the entire time and I passed it to him (Jerome Blake). I knew once we had a clean exchange, we got a good position. When Andre got it with the lead, there’s no way they are going to catch him. I trust my guys and he came through. It was a special feeling.”

Jerome Blake, who ran the second leg, added: “The victory lap was pretty cool, pretty special. I am from up the road in Vancouver, Canada. I have a lot of friends and family here watching. It is really special. My mum was at the turn to see me run that well. I can go home and celebrate with my family now. We had the same time as the Olympics last year. Our coach couldn’t be at the stadium due to unforeseen circumstances, but we trust ourselves. Once we got the stick moving and we don’t slow down, we are good.”

Coach Gilbert tested positive for COVID-19 a few days ago and has been isolating in Eugene but continued coaching the team via Zoom.

“In my opinion I think they’re a stronger team than what we were. They’re not just 100-metre guys, they’re 200-metre guys too. Their capacity is much higher. We were primarily 100-metre sprinters,” Gilbert told CBC. “I’m very proud to work with them and put forth the knowledge I have from over the years. They’ve made it easy.”

Like De Grasse mentioned, Gilbert also added that the Canadian team has chemistry going for them. De Grasse, Brown and Rodney were all part of the last Canadian relay team to win a medal at worlds — a bronze medal seven years ago in Beijing. Blake was part of the team that claimed silver at the Tokyo 2020 Olympics last summer.

Brendon Rodney, who ran the third leg, said: “We did it with the same guys I have growing up together in the sport. No words can really explain. The victory lap felt tired, but I was a great experience. I am sure they will be excited at home.”