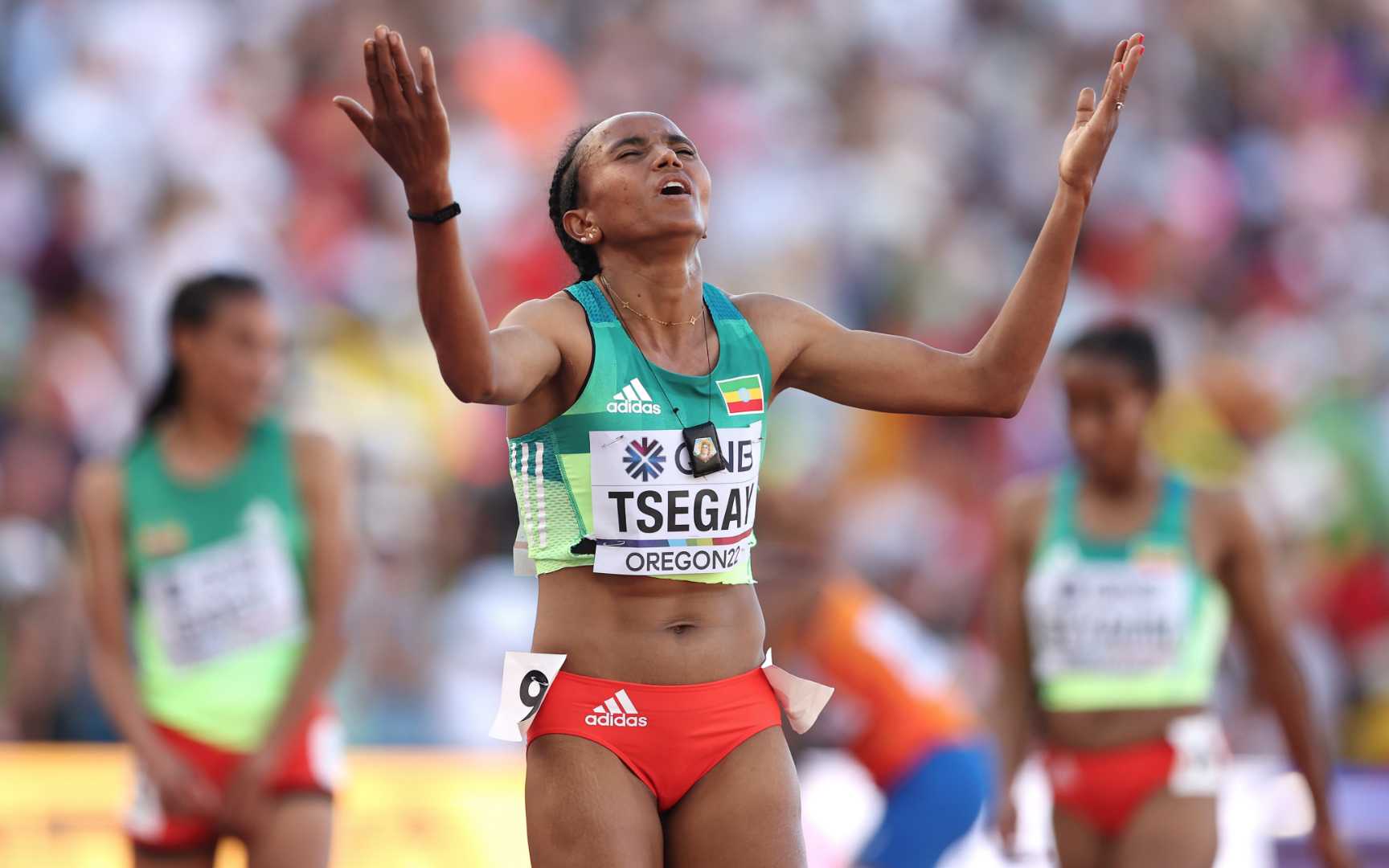 Gudaf Tsegay won Ethiopia’s fourth gold medal of the 18th World Athletics Championships in Oregon. She finished first in the women’s 5000m in 14:46.29, while her fellow countrywoman Dawit Seyoum clocked 14:47.75 and took the bronze medal. Beatrice Chibet of Kenya claimed the silver medal in 14:46.75.

10,000m gold medalist and world record holder, Letesenbet Giday, finished fifth but played a massive role in team Ethiopia’s triumph by successfully controlling the tempo of the highly tactical race with her compatriots.

This is Gudaf’s maiden outdoor world title after her remarkable 1500m silver medal a couple of days ago at Hayward Field and the 2019 world 1500m and Tokyo Olympics 5000m bronze medals.

Her victory means that, the Oregon22 World Athletics Championships are Ethiopia’s most successful worlds in terms of number of medals won, as the country had never four gold medals at a single edition of the championships before. Ethiopian fans at Hayward Field celebrated the feat by chanting, jumping and holding up their flag around the stadium concourse.

Ethiopia’s highest score was at the 2005 championship held in Helsinki, where it won three gold, four silver and two bronze medals.

In the meantime, Ethiopia is currently ranked second behind the host USA with four gold, four silver and two bronze medals and they are expecting more from the remaining Men’s 5000m and Women’s 800m events on the final day of these championships.

“I entered the race to win gold. As I expected and my fellow countrymen expected and wanted, we won the gold.

“We agreed to break from the pack and speed the race after the sixth lap. We knew Dawit would struggle a bit when we pace the race and decided to wait. Even if our plan to sweep all the medals was not successful, we managed to bring home the gold medal. And I am extremely happy about that,” Gudaf said when explaining how they were meticulously prepared and acted as a team in the race.

She became the fourth woman athlete to win gold medal for Ethiopia in 5000m at the world championships, after Messeret Defar (who won it twice), Tirunesh Dibaba and Almaz Ayana.

“Today is a special day for me, because I won a gold medal which I have missed at the 1500m and I am also recovering from injury. I dedicate this victory to my beloved mum and my exceptional husband who is also a very good coach,” the new world champion concluded.