Sean Safo-Antwi promises to improve upon start in 100m semis 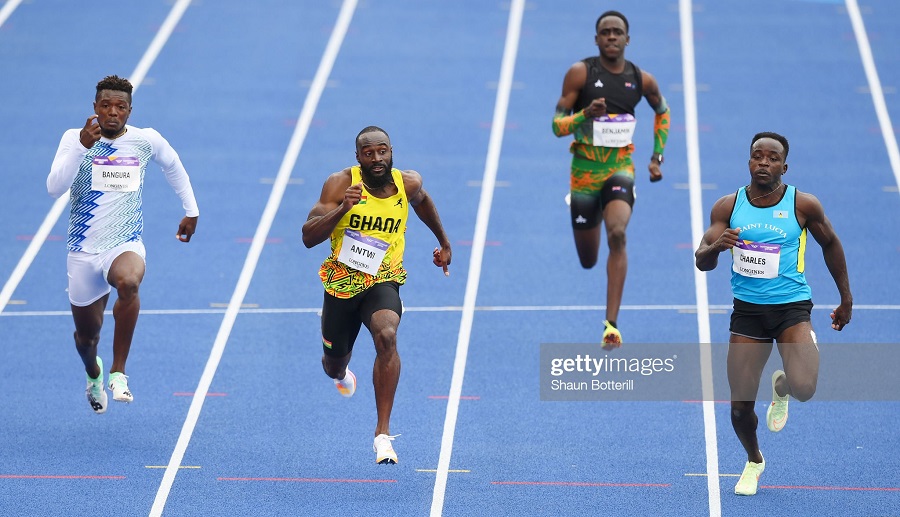 BIRMINGHAM, ENGLAND - AUGUST 02: Sean Safo-Antwi of Team Ghana and Stephan Charles of Team St Lucia compete during the Men's 100m Round 1 heats on day five of the Birmingham 2022 Commonwealth Games at Alexander Stadium on August 02, 2022 on the Birmingham, England. (Photo by Shaun Botterill/Getty Images)

Ghanaian sprinter, Sean Safo-Antwi, has promised to work on his start when he runs in the men’s 100 metres semi-final on Wednesday for a place in the final.

The UK-based athlete admitted that he would have to make improvements to his technique if he is to make it to the final.

On Tuesday, he qualified for the semi-finals after finishing in fourth position in his heats in a time of 10.33 seconds behind Jerod Elcock of Trinidad and Tobago (10.26 sec) and second-placed Emanuel Archibald of Guyana (10.28 sec).

Safo-Antwi explained that he was looking at improving on his start today in a bid to improve upon his time and make it to the final.

“I didn’t start well and that really affected my performance in the end.

“What matters most now is the qualification and then I have to work on my start in the semi-finals to improve my time,” he told Graphic Online.

Rated second in the Commonwealth in the 100 metres, Azamati won heat 7 with a time of 10.19 seconds ahead of Welshman Jeremiah Azu (10.35 seconds) and Imranur Rahman (10.46 sec) of Bangladesh who failed to advance.

The duo of Azamati and Safo-Antwi will team up in Ghana’s quest to win a medal in the 4x100m relay on Saturday.

In boxing, Ghana’s Jessie Lartey bowed out of the competition after losing 0-5 to England’s Mohammed Harris Akbar at the NEC Hall.