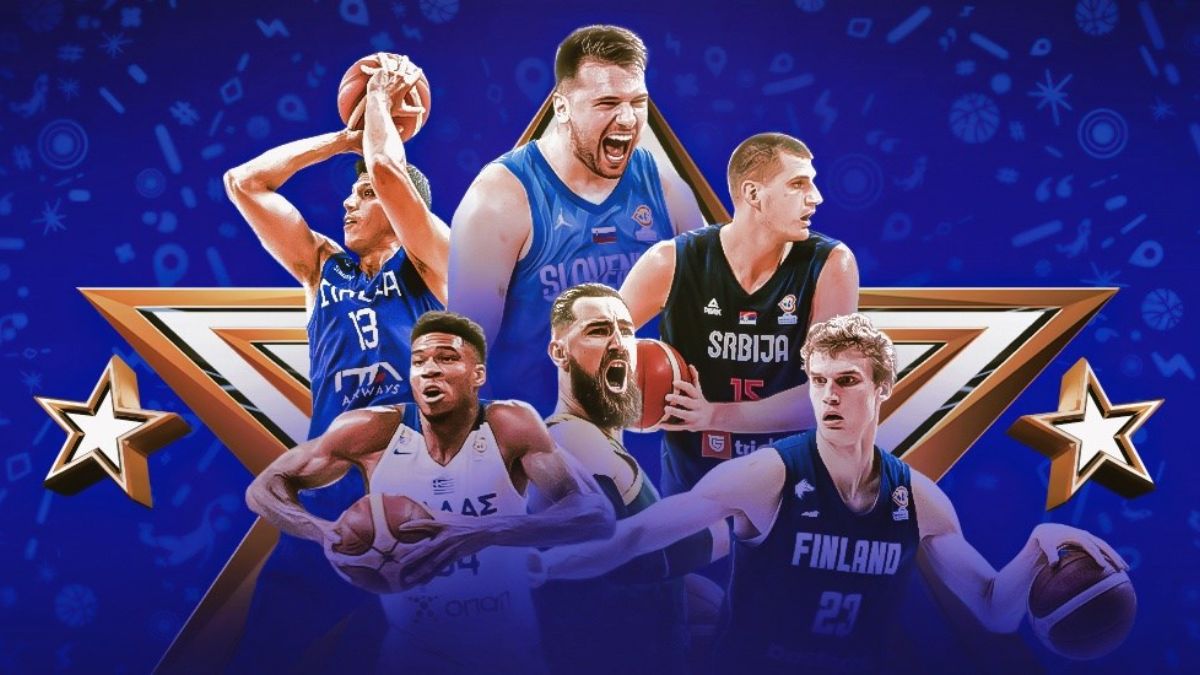 The wait for FIBA EuroBasket 2022 is almost over as the latest edition of Europe’s flagship event tips off later this week.

There will plenty of stars on show as Europe’s elite emerge to help take their respective nations to the title as the competition begins across the four cities of Tbilisi, Cologne, Milan and Prague.

Here’s a look at 15 players that will no doubt be grabbing the headlines throughout the tournament:

Strength, poise and all-round athleticism. Giannis is an unstoppable force. The Greek Freak showcased his dominance for the national team with a FIBA Basketball World Cup European Qualifiers scoring record of 40 points in an epic battle against Serbia before a record crowd came to watch him in Athens. Expect more of the same to follow in Milan.

Bogdanovic is amongst the Top 100 scorers in FIBA EuroBasket history and will be expected to continue to climb up from his current position at #73. The veteran leader on the team for Croatia has fellow NBA stars in Ivica Zubac and Dario Saric alongside him after they helped their nation get off to a winning start on the path to FIBA EuroBasket 2025.

Strap yourselves in, and enjoy the show. Doncic is one of the world’s most electrifying players and returns for a second appearance at EuroBasket after helping Slovenia win the title five years ago as a teenager. Doncic led his country to a maiden appearance at the Tokyo Olympics last summer and has averaged 25.0 points, 8.8 rebounds and 7.3 assists per game during the FIBA Basketball World Cup 2023 European Qualifiers after playing in both windows this summer.

The reigning MVP is back. Dragic retired after Slovenia’s historic title triumph in 2017 before announcing his temporary return to the national team at the start of the summer. Dragic was persuaded to extend his return beyond EuroBasket and links back up with Luka Doncic following their partnership five years ago. The roles may be reversed this time around, but Dragic still holds a big influence on the team.

The hopes of the Azzurri have been dented with the news of Danilo Gallinari’s absence due to injury, but they have another star ready in waiting. Fontecchio played a leading role to help Italy pick up two wins in the FIBA Basketball World Cup European Qualifiers and takes to the EuroBasket stage for the first time on home soil, in Milan. His only previous appearance at a major tournament came at last year’s Olympics in Tokyo.

Fournier will retain the mantle of being one of France’s main scoring options at EuroBasket. The 29-year-old made it onto the All-Star Five at FIBA Basketball World Cup 2019 and averaged 15.8 points per game at the previous EuroBasket, five years ago. Fournier is desperate to finally make it onto the top step of a major tournament podium so don’t expect him to hold back in pursuit of glory with Les Bleus.

Expect plenty of blocks and big dunks from the ‘Stifle Tower’. Gobert – like Fournier – has never won an international title at senior level with silver and bronze medals part of the collection. Gobert last played at EuroBasket in 2015 and made a competitive return in the World Cup European Qualifiers; averaging a double-double in the August window as France split their two games.

Jokic makes the game of basketball look incredibly easier at times with an effortless soft touch inside. The key to Serbia’s hopes, the big man makes a long-awaited debut at EuroBasket after not playing at the previous tournament. The reigning back-to-back NBA MVP helped lead Serbia to two crucial victories in the FIBA Basketball World Cup 2023 European Qualifiers and all eyes will be on the ‘Joker’ in Prague.

Markkanen was one of the leading stars at FIBA EuroBasket 2017 after guiding Finland through to the knockout stages. Five years on, and Markkanen has continued to shine on the international stage with several big performances this summer with the national team. Markkanen ranks third in scoring in the FIBA Basketball World Cup 2023 European Qualifiers and will be tipped to be amongst the top of the charts at EuroBasket.

Micic overcame an injury scare in the build-up to EuroBasket and is set for an important role on the Serbia team as they look to live up to their billing as one of the title favorites. The back-to-back EuroLeague MVP was limited to 12 minutes of action against Greece before coming back against Turkey. Micic only averaged 2.4 points per game at EuroBasket in 2017, but has taken his game to a new level since that tournament five years ago.

Nurkic produced one of the plays of the FIBA Basketball World Cup 2023 European Qualifiers in Bosnia and Herzegovina’s win over France. The 28-year-old came out on top in an inside duel with Rudy Gobert and the two teams will meet again at EuroBasket. Nurkic will shoulder plenty of responsibility with some tough matchups in Group B, but is more than capable of holding his own to lead the way for The Dragons.

The First Cedi. Osman links up with the likes of Furkan Korkmaz and Alperen Sengun in leading an intriguing, yet unpredictable Turkey roster. The Cleveland Cavaliers forward already has the experience in playing a number of major tournaments at international level. Osman averaged 16.4 points at FIBA EuroBasket 2017 before increasing his production to 20.4 points per game at FIBA Basketball World Cup 2019.

Sabonis will be one of the most versatile big men on display at EuroBasket with an all-round skillset boosting Lithuania’s chances of success. His last appearance in the tournament came in 2015, but Sabonis has greatly improved as a player since then and recently averaged 16.5 points, 5.5 rebounds and 5.5 assists per game during the August window of the World Cup Qualifiers.

Schroder is not renowned for being an elite scorer in the NBA, but the German point guard takes on a different role on the international stage, proving his prolific nature with a 38-point haul at the start of the summer. Schroder also relishes the battles at the defensive end and will be tasked with containing some elite opponents at EuroBasket.

Valanciunas has already competed at four previous EuroBasket tournaments and averaged a double-double of 15.8 points and 12.0 rebounds per game at the 2017 edition. The dominant big man likes to impose himself inside, but has improved his touch from outside and forms a dynamic partnership in the frontcourt alongside Domantas Sabonis for Lithuania.