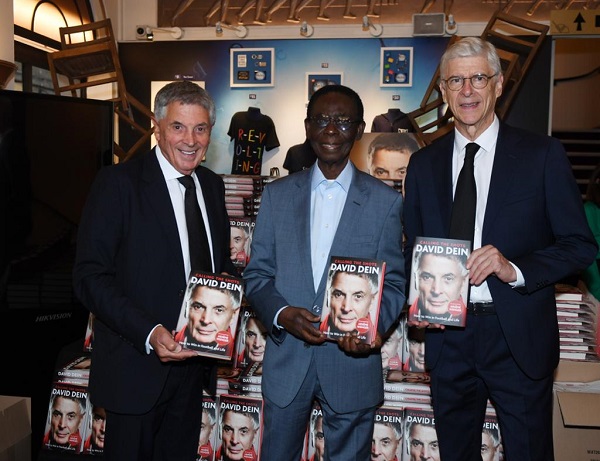 Distinguished Ghanaian sports administrator, Ray Quarcoo, was honoured as a guest by David Dein, a former co-owner of Arsenal Football Club at his book launch in London last week.

The launch of the book, Calling The Shots: How to Win in Football and Life, attracted other high profile guests, including Arsene Wenger, the legendary coach of Arsenal, whose biggest supporter, Queen Elizabeth II, passed away, thrusting the UK into a state of mourning.

In spite of the passing of the late monarch, a son of the club, Dein,shares spotlights into the inner workings of the sport, shaped by his association with the elite English premiership club, immortalised in his book.

Dein introduced little known Arsene Wenger to the English game and presided over the remarkable season of Arsenal’s unbeaten domestic campaign in the 2003-2004 season, dubbed ‘The Invincible Season’, driving the club to major triumphs on and off the pitch, achievements chronicled in the book.

In recognition of Ambassador Quarcoo’s experience as a sports administrator, a business executive, a philanthropist and a motivator, Dein, one of the most significant and influential figures in English football, hosted him as one of a few special guests at his book launch.

Ambassador Quarcoo was appointed a Goodwill Ambassador for Sports in Ghana in June 2011, thanks to his philanthropic and destiny-changing contributions to Ghanaian youth in sports.

Unfortunately, in late January this year, Ambassador Quarcoo, a former president of the Ghana Boxing Federation, was knocked down by an illness.

In consequence, he was admitted to the Korle Bu Teaching Hospital but he beat the count and got to his feet after approximately seven weeks of hospitalisation.

Currently in recuperative mode, Ambassador Quarcoo is on a medical tour of the United Kingdom for further evaluation during which he gained the attention of one of the central figures of the modern game, David Dein and the legendary coach, Arsene Wenger, a Fifa luminary, who wrote the foreword of the book.

Ambassador Quarcoo, the Consul of Haiti in Ghana, is a patron of the Sports Writers Association of Ghana (SWAG).

From 1991 till 1993, he served as the vice chairman of the welfare committee of the Black Stars.