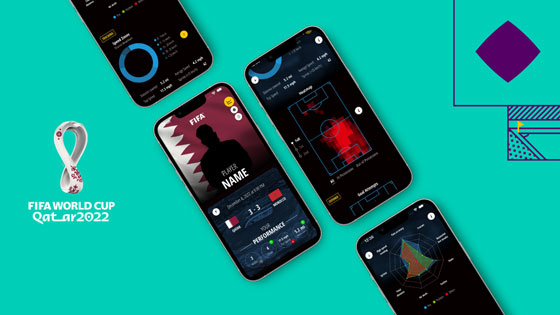 In line with the FIFA President’s Vision 2020-2023 to harness technology to further improve football, players at the FIFA World Cup 2022™ in Qatar will be able to get insights into their on-field performance through the FIFA Player App, FIFA announced today.

FIFA has developed the FIFA Player App, based on input from professional players, in collaboration with FIFPRO, the global representative of professional footballers. The FIFA Player App will be used for the first time at a FIFA World Cup™ in Qatar. The survey and interviews conducted show that players are very interested in their performance data and want to have easy access to this information. The FIFA Player App will provide the opportunity for each player to access their individual player-performance data shortly after each match. The data collected includes the following:

This data is then synchronised with match footage to enable players to watch all key moments of their own performance in detail, using different camera angles.

Additionally, multiple action photographs taken during key moments of each FIFA World Cup match will be made available to each individual player. Players will be able to save or share the photos on social media, together with their favourite match statistics, directly from the app.

Players will be able to access the FIFA Player App when they arrive in Qatar for the FIFA World Cup.

The FIFA Player App was successfully trialled with players from different teams at the FIFA Arab Cup 2021™ and was presented to the FIFA World Cup participating teams during the recent Team Workshop in Doha.

Johannes Holzmüller, FIFA Director of Football Technology & Innovation, said: “For the first time at a FIFA World Cup, not only the participating teams but also all players will have the opportunity to get direct access to their own performance data and the related video clips after each match. This player-centric development is based on direct feedback from the players and is another great example of how FIFA is using technology to the best of its potential by improving the football experience for the key actors on the pitch.”

This innovation is a first visible outcome of the collaboration between FIFA and FIFPRO  on the development of standards and best practices for the collection, protection and use of personal player-performance data. Both organisations have been working closely together to define a Charter of Player Data Rights with the goal of developing these standards whilst transparently informing football players about their privacy rights according to existing legislation such as the European General Data Protection Regulation (GDPR).

Simon Colosimo, FIFPRO Deputy General Secretary, said: “Players have clearly articulated to us that they want more access and benefit from the collection of their data. In combination with the Charter of Player Data Rights announced earlier this week, the FIFA Player App is a positive outcome that will activate personal data rights and provide a new resource for players at the FIFA World Cup in Qatar. We expect the joint work between FIFA and FIFPRO on player data to continue unlocking benefits for men and women players across a wide range of areas, including health and performance, in-game technology and matchday experience.”

One of the goals of FIFA’s Vision 2020-2023 is to harness technology to best serve football, players and the game – and that includes the way FIFA processes the personal data of players. FIFA is proud that players trust us to look after their data, and the FIFA team works hard to keep all personal information safe and secure. More information about how FIFA is protecting personal data can be found on FIFA’s Data Protection Portal and in the  FIFA Data Protection Pocket Guide, which explains the data protection rights in detail.