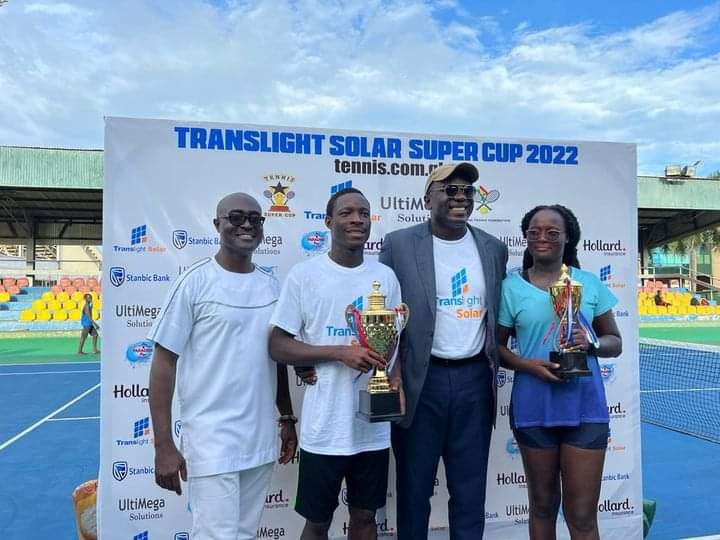 The top seed from Atomic Tennis Club, Antwi gave a display of breathtaking quality strokes to triumph 6-1,6-0 at the National Tennis Centre, Accra.

Acquah, who was bidding to win his second Tennis Super Cup title, has now lost a 5th title to Antwi. Acquah has now lost 9 of his meetings with Acquah since 2019.

Antwi becomes only the first man in the open era to win 15 titles in two years.

“It’s an incredible feeling,” said Antwi, who has lost only two of his 66 matches this year.

“I’ve had an amazing year, and it keeps going. Every time I play Acquah it’s a big challenge. He’s had a great tournament, and I wish we have many more tough games in the coming years.”

Antwi was beaten by Johnson at the median edition of the Tennis Super Cup, but he turned on Johnson this time around.
The crowds were treated to several pulsating baseline rallies in the opening stages, Acquah breaking serve for 1-0 only to surrender his advantage.

Antwi showed brilliant skill in windy conditions to save three break points for 1-1 and constructed a couple of stunning combinations to strike in game three. The top seed was dictating the tempo, and he broke again when Johnson netted a backhand under pressure before serving out the 53-minute opener to love. But the errors were too much, as Antwi won the first set 6-1.

In the second set, a comfortable service hold made it 4-0 and Antwi thumped his chest with delight on breaking a weary Acquah to love in game five.

He unleashed a glorious inside out forehand 3rd winner of the match to seal an unforgettable win and his First Tennis Super Cup title.

Antwi took home five thousand cedis wity runner up Acquah also taking home two thousand cedis. However, in the Women’s event, Precious Nunana can’t say which of her Open titles means the most to her, but she knows she’ll never forget how she managed to outwit Yvonne Bruce Tagoe in the Translight Solar Tennis Super Cup final.

“It’s tough to compare. I’m a different person. I’ve changed so much. But the happiness of winning a title is the same,” said Precious with the Translight Solar Tennis Super Cup trophy beside her.

“This tournament is a pretty big tournament, it’s a great tournament. It’s a great victory, in my opinion. I really take it with both hands. It gives me an extra boost to believe that there is more to come,” she stressed.

“We are passionate about sports ( tennis) and we desire to help Ghana Tennis to develop the game. We are not only sponsoring professionals alone but the juniors and wheelchair tennis as well,” said the CEO of Translight Solar, Kobina Nyanteh.

“Translight Solar is to here stay and give the youth the needed exposure,” he added.

This year’s edition of Tennis Supper Cup was organised by Ultimega Solution and sponsored by Translight Solar of course, with support from Hollard Insurance, Paradise Pac and Tennis Foundation Ghana.