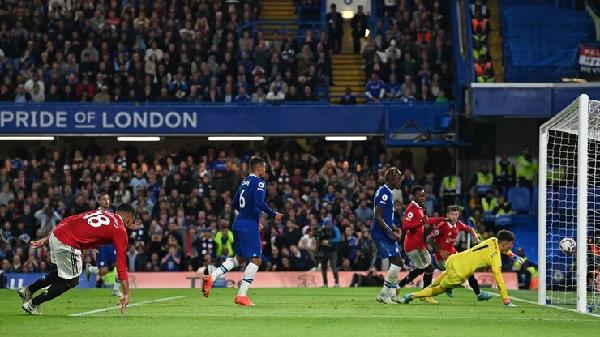 Although frustrated at the death, Graham Potter continued his strong start as Chelsea boss to make it eight games undefeated (W4, D4) as they drew with Manchester United 1-1 at Stamford Bridge.

United have now lost just once from their last 12 H2Hs with Chelsea.

United were the first to go close as Luke Shaw drove down the left with the ball before drilling a shot narrowly wide of the post from the edge of the area. The visitors continued to apply pressure and Chelsea needed a smart save from Kepa Arrizabalaga to keep the scores level, as Antony received the ball on the edge of the box before curling an effort towards the bottom corner, which the Spaniard kept out.

The Red Devils had a golden opportunity to take the lead when Marcus Rashford was played through on goal by Bruno Fernandes, but Kepa rushed out to deny the Englishman a goal. Rashford went close again as he bore down on goal before shooting across Kepa but the keeper once again made the save. United were having the better of the chances and almost took the lead just before halftime, as Antony struck a powerful shot just wide of the post with his right foot.

The first 20 minutes of the second half failed to provide many chances for either side, until a corner found the head of Trevoh Chalobah who crashed a header off the crossbar. Kepa was then called into action again to keep Chelsea level, as Fred found Fernandes who saw his low shot saved.

Chelsea were awarded a late penalty in the 87th minute when Scott McTominay bundled Armondo Broja to the floor from a corner, and penalty specialist Jorginho duly stepped forward to send David De Gea the wrong way and give the hosts a late lead.

However, there was to be late drama when Casemiro scored a header in added time to earn an unlikely point for the Red Devils. The late equaliser keeps United just a point adrift of the top four in fifth, whilst Chelsea are now just a point above United in fourth.