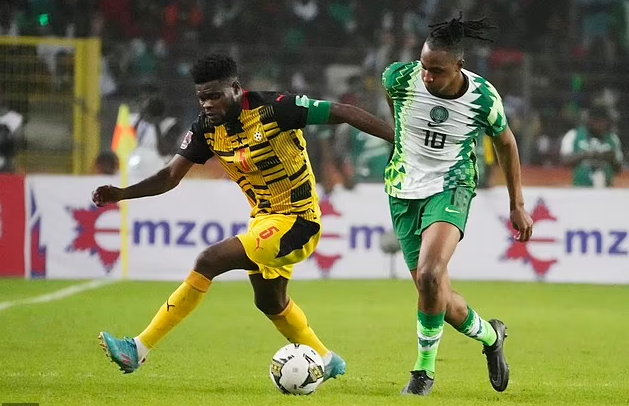 Arsenal midfielder Thomas Partey is set to lead Ghana at the World Cup after he was selected in the country’s 26-man squad for the tournament in Qatar.

Partey is the headline name in the Black Stars side, which also includes Southampton defender Mohammed Salisu, Brighton full-back Tariq Lamptey – following his switch of allegiance from England – and Daniel Amartey of Leicester.

Ajax star Mohammed Kudus, who has impressed with his performances in Holland so far this season, and Athletic Bilbao striker Inaki Williams – whose brother Nico has been picked for Spain – are also in the squad announced by manager Otto Addo on Monday.

But there is no place for the likes of Leicester’s Jeffrey Schlupp and Genk midfielder Joseph Paintsil.

Callum Hudson-Odoi, who is on loan at Bayer Leverkusen from Chelsea, reportedly rejected the chance to play for Ghana despite being snubbed by England.

The 22-year-old is eligible to play for the African nation through his Ghanaian parents, meaning he could still switch his international allegiance despite making three senior appearances for England.

All three of those caps were earned before he turned 21, which allows him to play for another nation if he wishes.

Ghana face an uphill task to qualify for the knockout round in Qatar after being draw in Group H alongside Portugal, Uruguay and South Korea.

Addo, who took over from sacked coach Milovan Rajevac after their dismal failure at the Africa Cup of Nations in January, has faced calls to be axed before the tournament starts due to Ghana’s poor run of form.

Results didn’t get much better in September, when they were outclassed by Brazil and only recorded a narrow 1-0 win over Guatemala, ranked 81 places below them, in a recent friendly.

The country itself has sought divine intervention by holding two national days of prayer and fasting in a bid to reverse their fortunes ahead of the tournament.

Ghana’s best result at a World Cup came when they reached the quarter-finals in 2010 before losing out to Uruguay in an infamous encounter.