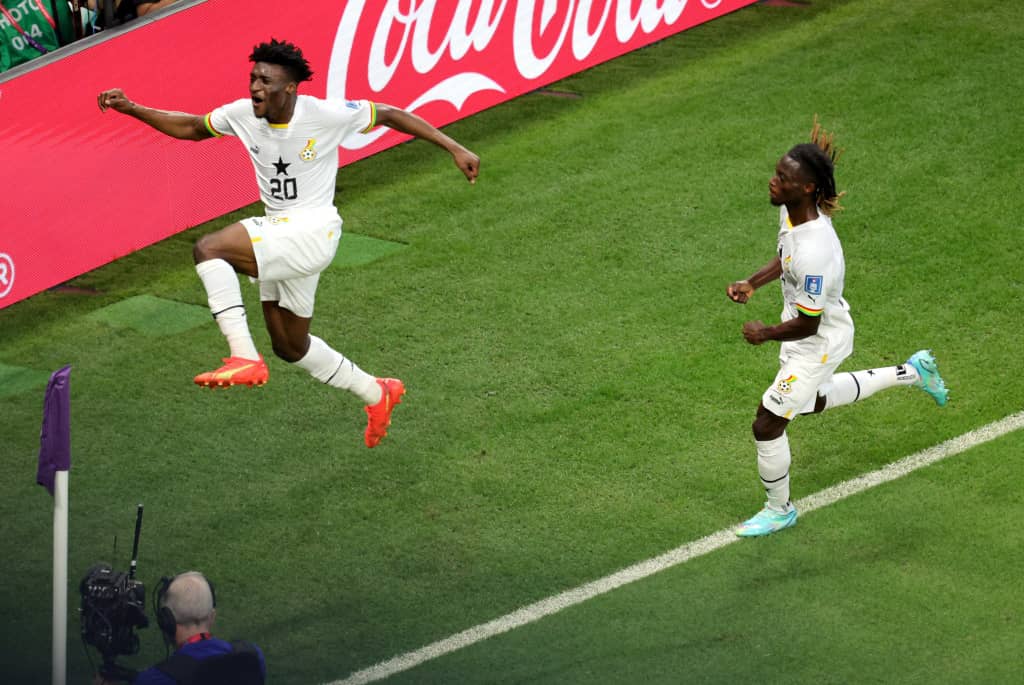 The Black Stars of Ghana recorded their first win of the FIFA World Cup 2022, defeating South Korea 3-2 at the Education City Stadium on Monday.

Victory was secured courtesy of a goal from Ajax star Kudus Mohammed with the scores tied at 2-2.

It was Kudus’ second goal of the day after he had given the Black Stars a 2-0 lead in the first half, 10 minutes after Mohammed Salisu had opened the scoring.

He also re-jigged his formation switching from a back three with wingbacks to a back four manned by Mohammed Salisu, Daniel Amartey, Lamptey and Mensah.

Southampton defender Mohammed Salisu opened the scoring in the 23rd minute smashing in a loose ball after the Korean defence failed to deal with a set-piece delivered by Jordan Ayew.

It was the 22-year-old’s first goal for Ghana in only his second competitive appearance for his country.

Prior to that the Koreans had dominated the opening exchanges and failed to make use of any of their seven corners.

Paolo Bento’s side appeared to have targeted young right fullback Tariq Lamptey – making his first competitive start for Ghana after a nationality switch – with dangerman Son Heung-Min making constant runs at him and winning dangerous set-pieces.

However, the Brighton and Hove Albion man held his own against his English Premier League opponent.

The goal turned the tide in favour of the Ghanaians who until then had been under the cosh for the opening 20 minutes with their midfield unable to keep hold of the ball.

Ayew playing down the left flank delivered an in-swinger with his right foot which was glanced home by Mohammed Kudus.

After recess, goalie Lawrence Ati-Zigi was called into action by forward Gue-sung Cho in the 52nd minute but leapt up to parry away a header.

That was a sign of things to come as the Korean’s reduced the deficit in the 57th minute when Lamptey was robbed off the ball in the Ghanaian defensive third by substitute Kang-in Lee who delivered a cross for Gue-sung to head home.

Kudus restored the Stars’ one-goal advantage and completed his brace in the 68th minute with Jordan Ayew once again in the thick of affairs. Ayew played in Mensah down the left flank and the Auxerre man cut the ball back towards Williams but he missed his shot and the ball fell kindly to Kudus who finished calmly into the corner with his left in-step.

Despite a late flurry from the Koreans, Stars’ shotstopperbAti-Zigi preserved the one-goal lead with three saves – first in the 78th minute when he kept out a Son free-kick, in added time when he rose to keep out a header and made a smart save at his near post.

The Stars’ moved to second place in Group H behind Portugal on goal difference with the Portuguese playing Uruguay later tonight.