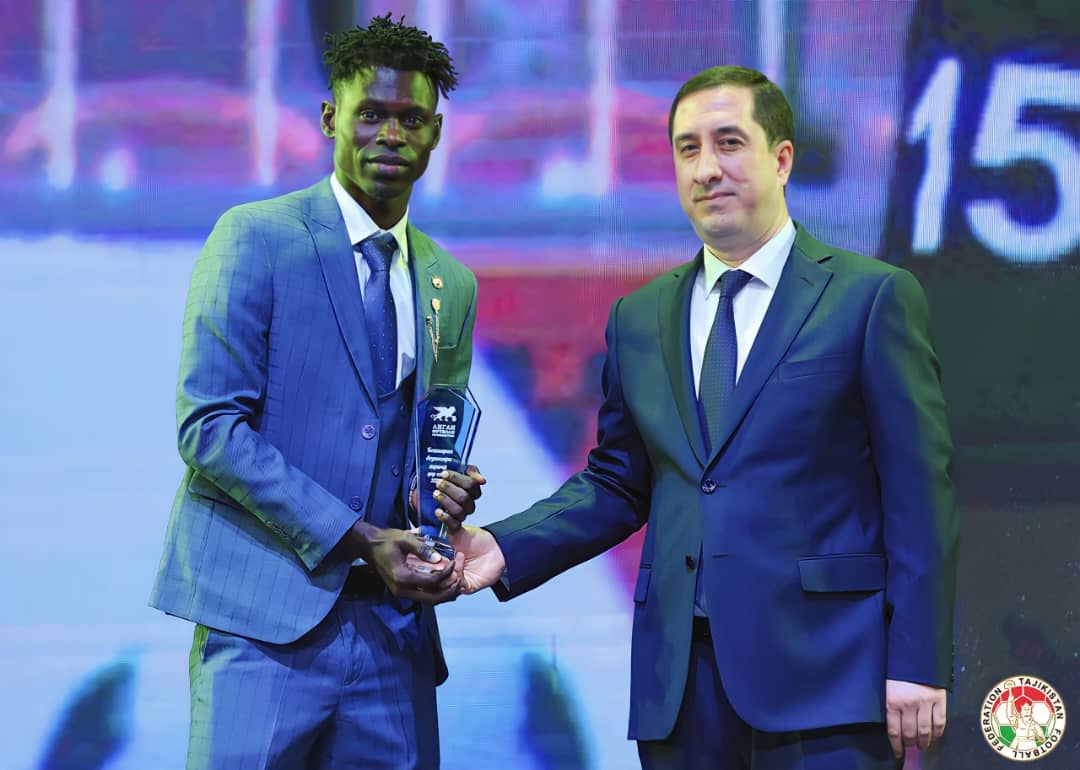 Young Ghanaian defender, Samuel Ofori is celebrating a hugely successful first season in Tajikistan after being named the best foreign player, having guarded his side, FC Ravshan Kulob to a historic AFC Cup qualification.

23 year old Ofori played 20 of 22 league games for Kulob in the 2022 Vysshaya League campaign, missing the other two only through suspension for accumulated yellow cards, and earning many man-of-the-match accolades enroute.

In the end, the lanky 6’1 ft defender’s aerial prowess and presence at the back greatly propelled Kulob to the runner-up finish in the Asian country, just a solitary point ahead of both 3rd and 4th placed, FK Khujand and FK Khatlon respectively.

Not did it come with qualification by Rashvan Kulob to a playoff spot in next season’s AFC Cup, Asia’s second tier club tournament, it also helped Samuel Ofori leap over about 70 foreign players as the very best in the Tajik league in 2022.

Owusu takes the spotlight at the end of season awards gala

A battle with some top players from across the globe including Glib Grachov of Ukraine, Gonzalo Ritacco of Argentina, Kosmynin of Belarus, Samandor Ochilov of Uzbekistan, Sergey Garanzha of Russia, Tony Bikital of Cameroon, Innocent Kouassi of Ivory Coast, came down to a battle between three Ghanaians, all of whom excelled in the Vasshya 2022 campaign.

Striker Iddris Aminu fired in the goals to power champions Istiklol Dushanbe to the title by a massive 13 points, and deservedly made the top 3 of the best foreign player race alongside compatriot Godson Quaye, goalkeeper of 4th placed FC Khatlon but it was defender Samuel Ofori who got the nod to become the first African player to win the award.

“I feel great because I worked really hard for this and it makes me so happy to be recognised considering the many good foreign players in the league. Hard work pays so I’m going to work even harder to achieve my dreams,” said Ofori who is back on holidays in Ghana.

His local manager, Accra based businessman and sports investor, Evans Bernie-Johnson, is waxing lyrical amid utopian dreams for the player who played the previous season at South Africa second tier side, Dolphins before switching to Tajikstan last year.

“I’m extremely proud of him, so many great players but my boy was able to beat them all to the award, glory be to God,” .stated a very confident Mr. Bernie-Johnson, CEO of Accra based BJ Wise Electronics.

This is just the beginning. I can’t wait to see him play for a top club in Europe and the Champions League soon, not forgetting even the Black Stars,” he added.